Hold off on applying fall fertilizer to fields until soils cool 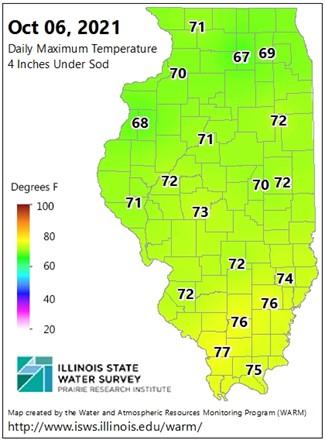 The unusually warm start to fall has caused soil temperatures across the state to remain 5 to 10 degrees warmer than average for this time of year, according to Illinois State Climatologist Trent Ford with the University of Illinois’ Illinois State Water Survey (ISWS).

Given these warm soil temperatures, farmers should hold off on fall fertilizer and manure applications for at least two or three weeks since it can be less effective and can harm the environment.

“The push for application may be to empty manure storages. However, these warm air and soil temperatures can increase the potential for odor complaints,” Solomon says. “The nitrogen volatilized off as ammonia gas can be a major component of the odor produced during application. Keeping the nitrogen in other forms longer benefits both the crop and the environment.” 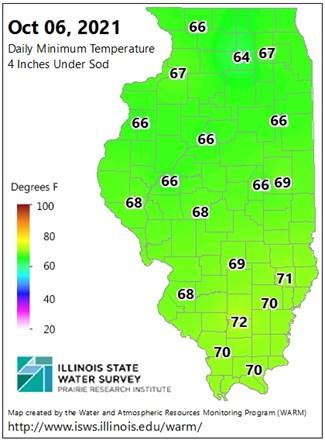 The Illinois Agronomy Handbook recommends not applying fall fertilizers until the daily maximum bare soil temperature at 4 inches is below 50°F. Above this temperature, the rate of nitrification increases significantly in soils. This chemical change increases the risk of nitrogen losses through gas emissions and leaching with soil water movement before spring crop planting. On average, the last day with maximum 4-inch soil temperatures above 50°F is around November 1.

Farmers may be concerned about the potential of less-than-favorable weather for fertilizer application later in the season. But Ford says does not show any signs of the potential for problematic weather in the next few weeks.

“Both long-range forecasts and outlooks are leaning to near to above normal temperatures at least through the last week of October,” Ford says. “In addition, forecasts do not show any indication of persistently wet conditions for the second half of October.”

Current soil temperatures across Illinois are available through the State Water Survey’s Water and Atmospheric Resources Monitoring Program at www.isws.illinois.edu/warm/soil.