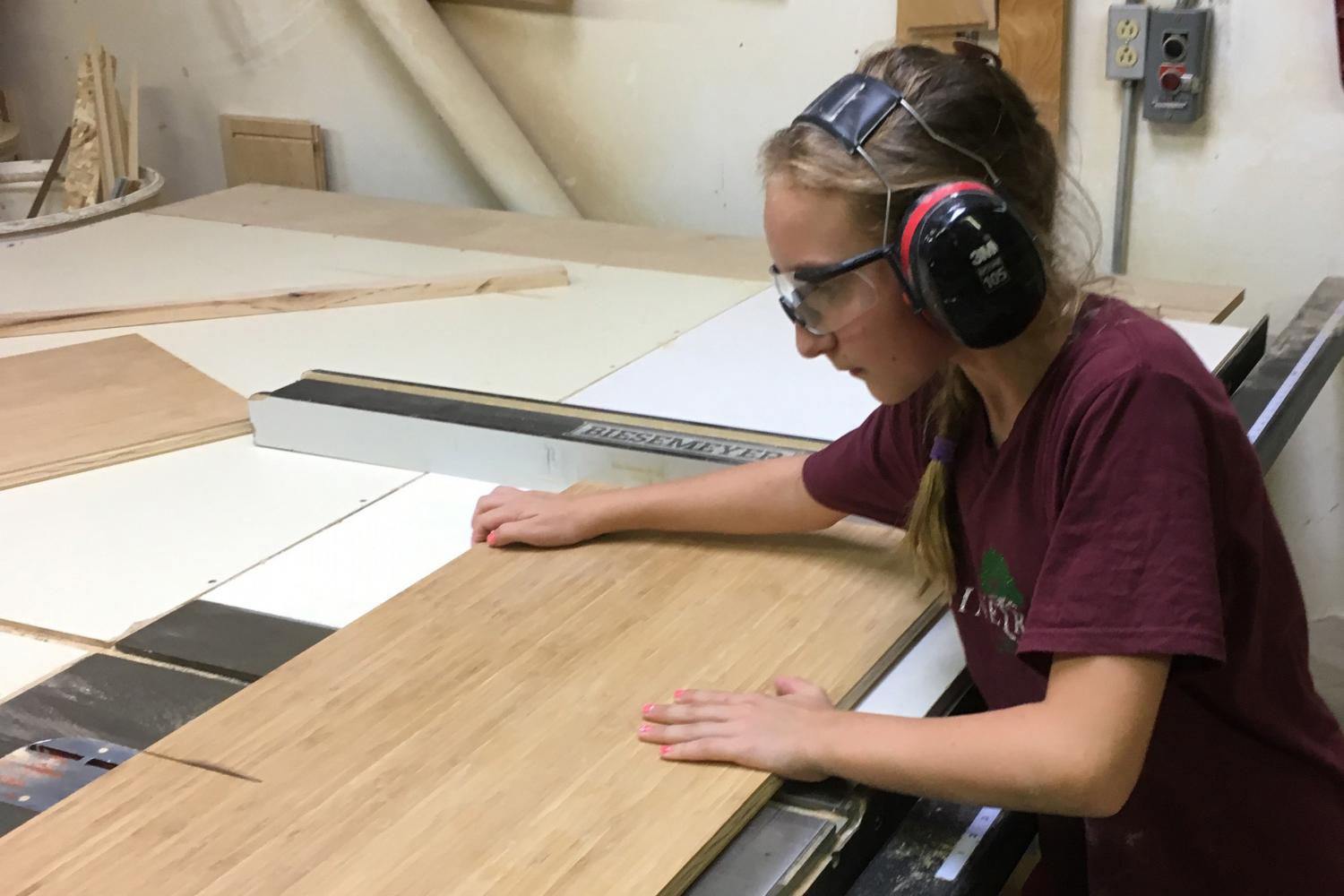 From her perch on a stool and behind the glint of safety glasses, 12-year-old Evie Ribbing has a good view of her dad's woodshop. But the buzzing table saw she's operating has her full attention, as it should.

“Measure twice, cut once,” is a rule this Clinton County 4-H member and woodworking aficionado knows by heart along with the 4-H pledge.

In a matter of a few years, what started as a new 4-H project for Evie Ribbing became a business, fittingly dubbed Sawdust & Sparkles by E.

This seventh-grade entrepreneur’s approach to her new side hustle is as precise as the custom cutting boards and trivets she sells. She spends hours researching how something is made, sometimes watching video tutorials online. Evie and her dad, Dominic Ribbing, then draft detailed sketches before measuring and cutting perfectly symmetrical pieces that fit seamlessly together.

The best part, she says with a grin, “is watching people react when I told them I made it.”

Evie and her younger brother, 8-year-old Henry, have been members of the Aviston Aces 4-H Club since 2017. Evie has a lot of interests that 4-H allows her to explore: cooking, visual arts, quilting, forestry, fishing. Last summer, she showed up to the county 4-H show with 13 projects in tow. Henry, a first-year Clover, is looking forward to when he’s old enough for the tractor driving project.

“I love that 4-H is real-life stuff,” says their mom Mandy Ribbing. “It’s more in-depth. 4-H gets you ready for life.”

Woodworking requires both precision and creativity, two skills Evie has plenty of. And in her mind, being able to build something out of nothing is more practical. Evie would rather spend a few days making custom drawers for her bedroom furniture than order them online and wait three weeks for delivery.

Evie's parents weren't surprised when the then 10-year-old first tried a woodworking project in 2017, but they are surprised she's stuck with it.

“I got pictures of her building a lot of this stuff because I figured nobody would believe she’d do it,” says her dad Dominic Ribbing, who owns a woodworking company in Breese and supervises Evie as she works.

It was even more of a surprise when her first woodworking project, a stool with an intricate multicolored seat, won a best overall ribbon at the Clinton County Fair and a blue ribbon at the Illinois State Fair.

“I encourage everyone to start small at the beginning and I remember [Evie] didn’t,” says Aviston Aces Club co-leader Kimberly Wolter. “She goes all-in on a project.”

Woodworking projects are popular in Clinton County 4-H thanks to a group of volunteers who lead several hands-on workshops throughout the year. Every 4-H member leaves with a completed project and the encouragement to keep learning at home.

“It’s one of the largest project area categories at our show and there are some amazing projects that show up,” Wolter says. “Evie’s proven herself to be a champion.”

A 4-H alum from Hancock County, Wolter makes sure their club is a flexible, low-stress environment with something for everyone. “We try to promote how broad 4-H is and that there literally is a project area for every interest,” she says.

The most difficult project Evie has made was her entry for the 2019 4-H show, a cabinet with a fold-down front that turns it into a desk.

In the fall of 2019, Evie started sketching out designs for cutting boards with handles to make them easy to carry around the kitchen. After selling a few to friends and family as Christmas gifts, then a few more at a vendor’s fair, Sawdust & Sparkles was born.

Now, Evie plans to enter her company as a project at the Clinton County 4-H show in June, exploring the business side of costs and marketing efforts.

Evie knows her enthusiasm for woodworking is something that sets her apart from a lot of her friends. “They think it’s too much work; that they have to put down their video game and go do something,” she says.

But that doesn’t stop Evie from sharing her skills with other 4-H members willing to learn.

But knowing Evie, she’s unlikely to follow that last bit of advice.

If you're interested in learning more about 4-H or joining a club in your area, fill out this survey to get started.