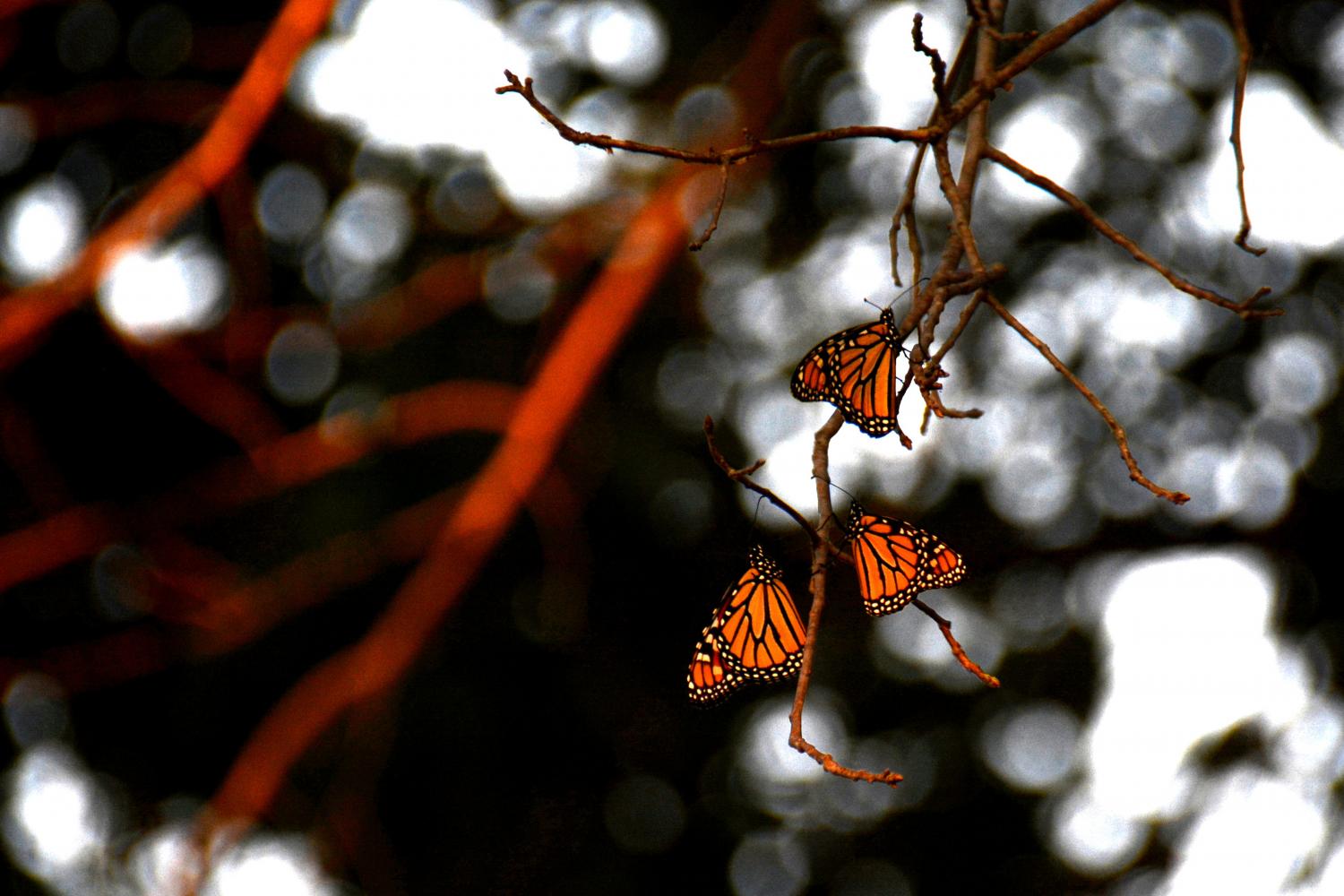 It was early on a hot September morning several years ago that Master Naturalist program coordinator Nancy Kuhajda turned into Goose Lake Prairie State Natural Area in northern Illinois. She had arrived early for a program and decided to spend a few minutes in the picnic area listening to the early morning sounds of nature. Sitting there, she noticed an unfamiliar, subtle sound — a strange repeating flutter, almost like a heartbeat.

Nancy looked up and noticed the trees overhead — elm, maple, oak — had several browned-out patches of leaves. But then a fissure of sunlight cut through the canopy. She had struck gold — well, orange. Nancy had stumbled on a large roost of the Eastern North American monarch butterfly (Danaus plexippus). Hundreds of monarchs hung from the branches fluttering their wings, readying for takeoff.

She couldn't wait to share the news with her Master Naturalist volunteers in Will and Grundy counties. Once she did, things were never the same for the Fab Four – Phyllis Schulte, Jo Chenell, Kathy Hearne, and Sally Skoff – who became The Secret Society of Monarch Roost Hunters in 2018.

Monarch butterflies are not on the federal endangered species list, but they are at-risk and up for consideration so local observation and conservation efforts are crucial.

Every fall, this group of dedicated volunteers is on the hunt to find and learn more about monarch roost sites in Northeastern Illinois. They are also Illinois Butterfly Monitors, with Phyllis having clocked in more than 25 years surveying local butterfly populations.

Monarch butterflies have several generations. The first three live about a month. The fourth generation, the super generation, lives for nine months and endures a 4,000-mile trip from as far north as Canada to their winter home in Mexico.

Not bad for being North American’s smallest migratory animal.

The mystery of the monarch roost

How do monarchs know where to go? How do they know to roost together?

Several factors play a part in roost behavior. It was once thought that a pheromone “invited” other monarchs to the roost, but further research has not borne that out.

Now, scientists theorize the roosts are an anti-predatory strategy that follows the adage "safety in numbers." Roosting together helps monarchs survive migration.

How to scout out monarch roosts

Before they started scouting, the roost-hunting team researched for clues on how to find sites in a crazy hide-and-go-seek nature game. In the fall, Kathy heads out in the afternoon to search the skies for monarchs. When she sees a gathering, she calls the others, and everyone jumps in their cars to meet at the potential roost site.

"Kathy observed around 200 monarchs, but by the time I got there, they were nowhere to be found," says volunteer Sally Skoff of one scouting venture. "While I was hoping to see an early wave, [that] was not the day. I guess this is like fishing. You just never know. I'm always going to show up if I get a call because that's when the big ones get away."

Monarchs migrate during the daytime. But at dusk, they gather in trees — sometimes a few dozen, sometimes in the thousands – to shelter and rest for another leg of their trip.

Sometimes the roost is fleeting, lasting only one night. Other times the butterflies return to a roost site for a week or two. It was thought that monarchs followed the same migration highway every year, but as more data is gathered, the route doesn't matter so much as what is available in the environment.

Dr. Bill Calvert, a monarch scientist from University of Massachusetts Amherst, has studied monarch roost and overwintering behavior for years. He suggests monarchs choose a roost site based on a few factors.

This fall, consider starting a nature search party for local roost sites in the hunt for Orange September.