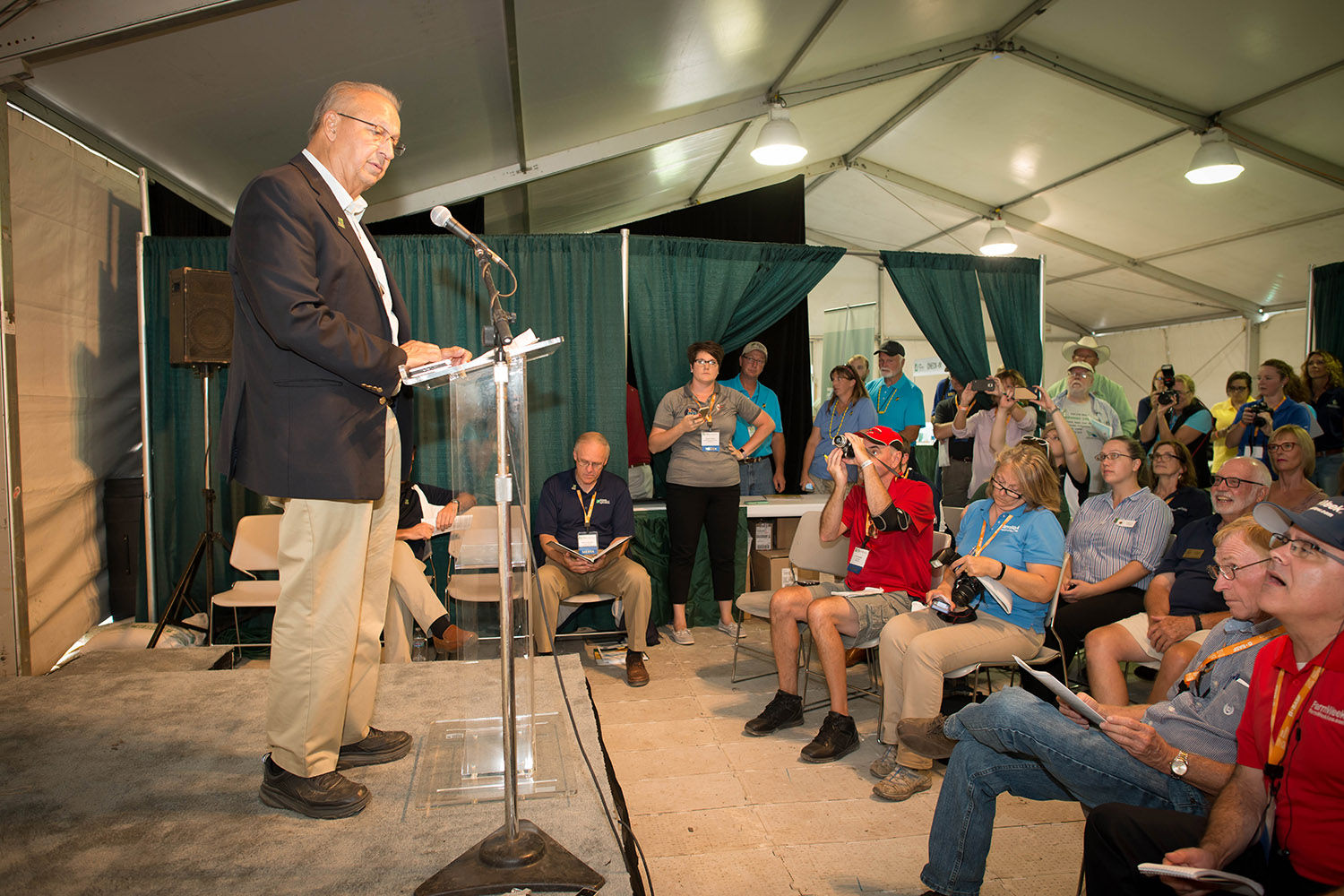 As part of the state’s on-going commitment to reduce nutrient losses, University of Illinois Extension staff joined directors of the Illinois Department of Agriculture (IDOA) and Illinois Environmental Protection Agency (EPA) today for the release of the state’s Nutrient Loss Reduction Strategy Biennial Report. This document, unveiled at the 2017 Farm Progress Show in Decatur, Illinois, describes actions taken in the state during the last two years to reduce nutrient losses and influence positive changes in nutrient loads over time.

The Illinois Nutrient Loss Reduction Strategy (NLRS) is one of many state strategies developed and implemented over the 31-state Mississippi River basin that are intended to improve water quality. Illinois’ science-based strategy, derived from work done by the university’s College of ACES scientists, provides a framework for reducing both point and non-point nutrient losses to improve the state’s overall water quality, as well as that of water leaving Illinois and making its way down the Mississippi River into the Gulf of Mexico.

The ACES scientists calculated the implementation targets needed to achieve the strategy's nutrient loss reduction targets, and found the first evidence of improvement: a 10 percent reduction in average annual nitrogen load between 2011 and 2015. Although this decline took place before the strategy went into effect, this reduction is encouraging.

“I was part of the team that did the original science assessment four years ago and it is great to see that some of these practices being implemented around the state,” said Associate Dean and Director of Extension George Czapar. “This has been a collaborative effort and it is clear that this is a priority issue for the agricultural community. The need for research-based information and sharing educational resources has never been greater.”

“Illinois agriculture has a positive story to tell,” said IDOA Director Raymond Poe. “We have seen a significant increase in the adoption of various best management practices. Our partners and stakeholders have done a tremendous job getting the word out about what we are doing in Illinois with the Nutrient Loss Reduction Strategy. Farmers understand the consequences of nutrient loss, and they support our quest to minimize losses.”

“In just two years, we are already seeing the impacts of Illinois’ strategy on water quality,” said Illinois EPA Director Alec Messina. “The collaborative efforts of our stakeholders are resulting in real improvements in Illinois’ waters and we look forward to future improvements that will be gained as additional practices are implemented.”

According to Gregory McIsaac, an emeritus professor with the university's Department of Natural Resources and Environmental Sciences, whose research team discovered the decline in nitrogen loss, "Nitrate loss appears to have declined since about 2000 due to higher corn yields with little increase in fertilizer input. Phosphorus losses have increased. There are several complicating factors that need further study."

The report also contains information from a recent survey conducted by the U.S. DOA National Agricultural Statistics Service as well as data from other existing sources to serve as a basis to measure progress towards overall water quality improvements now and in the future.

The Agriculture Water Quality Partnership Forum (AWQPF) reports that the agricultural sector invested more than $54 million in nutrient loss reduction for research, outreach, implementation and monitoring. These contributions have come from AWQPF members and other organizations that are working towards reaching the goals set forth in Illinois NLRS.

Because of proactive outreach by various agriculture groups, a 2016 survey showed that 70 percent of Illinois farmers are already aware of best management practices to reduce nutrient loss. These include a move toward split spring and fall nitrogen applications and an increasing number of acres dedicated to conservation practices such as a use of cover crops.

In the two years since the strategy's release, significant strides have also been made in limiting the amount of phosphorus discharge from wastewater treatment plants in Illinois. Point-source sector members have been reaching out to key decision makers and practitioners to share regulatory updates as part of the National Pollutant Discharge Elimination System (NPDES) program.

As of 2016, nearly 80 percent of all effluent from wastewater treatment plants in Illinois is regulated under an NPDES permit that includes a total phosphorus limit. This number will continue to grow as existing permits expire or come up for renewal. As part of their effort, wastewater treatment facilities report spending almost $145 million to fund feasibility studies, optimization studies, and capital investment.

“There is a lot more work that needs to be done,” said Warren Goetsch, IDOA deputy director. “However, in releasing this report at the Farm Progress Show, we are introducing these successes to farmers who may be somewhat apprehensive about trying new management practices. Increasing the exposure of our message will keep this effort in front of producers so we can continue to make progress in the years to come.”

This report, which was facilitated by the Illinois Water Resources Center and Illinois-Indiana Sea Grant, led by Brian Miller, will be updated again in 2019. The science, monitoring, and activity from each sector will be updated to demonstrate Illinois’ continued commitment to nutrient loss reduction.

“What’s made NLRS remarkable is that we had a broad suite of stakeholders that came together to work on the strategy, and they brought not only their ideas but the support of their organizations. They all got behind it,” said Brian Miller, Illinois Water Resources Center and Illinois-Indiana Sea Grant director. “It started with a science assessment from the university that identified problems and potential solutions. Working together we’re already starting to see some successes.”