Youth compete in robotics competition that’s out of this world

BLOOMINGTON, Ill. ­– Youth from 13 teams across Illinois demonstrated their learning, celebrated their accomplishments, and interacted with others who share an interest in robotics at the 4-H SpaceBot Mission Command Challenge Robotics Competition held at the Interstate Center on the McLean County Fairgrounds on April 16. 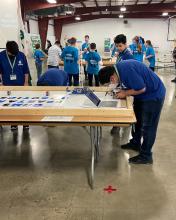 The competition theme this year was drawn from the work of the 4-H in Space Mission Command Youth Team, which prepares curriculum and programming options for Illinois youth working with the International Space Station National Laboratories (ISS) and The Lab for Advanced Space Systems at Illinois, Department of Aerospace Engineering, (LASSI).

“I really appreciated the chance to learn and develop with my teammates the skills that could really help me out in the real world,” says first-time competitor Brogan Keltner of the A2=B2+C2 Team of Stephenson County. “We did a lot of practicing and we knew there would be a lot of pressure, so we really dialed down and worked as a team together to prepare.”

Competition judges were on hand to score events and determine the competition category winners.

“It’s really fun to see what kids are doing and there are so many different ways that the teams achieve and solve the same task,” says past competitor and three-time judge Dhruv Rebba of McLean County. “It’s cool to think I was in their same position when I was little and it’s really fun to see. As a past competitor, I understand everything you go through and it helps to understand how things work and how the teams program and I can make more informed decisions as a judge.”

Reserve Advanced Champions went to the Duh-code-duh Team of Union County.  The team was also the recipients of the Advanced Programming Award and All Team Spirit Award.  Team members include: Callysta Borders, Kaylie Adams, Kim Adams, and Leanna Henson.

Those interested in exploring robotics are encouraged to reach out to their local Extension Office to connect with a 4-H robotics experience.

“I would say definitely do it,” says Brogan. “Because I really enjoyed this year, just programming and learning and developing with my team.”