Composting provides a way to process manure in a way that reduces volume, creates a stable organic fertilizer, and potentially destroys pathogens and weed seeds in manure. Livestock and poultry manure composts are an excellent source of slow-release plant nutrients. They also provide organic matter that improves soil properties by supplying “food” for soil organisms that slowly convert organic nutrients into plant-available forms and improve soil properties that improve water infiltration, water holding capacity, and aggregate stability. Although compost can contribute to overall plant and soil health, some caution is warranted when applying compost to soils, particularly when used on growing crops. 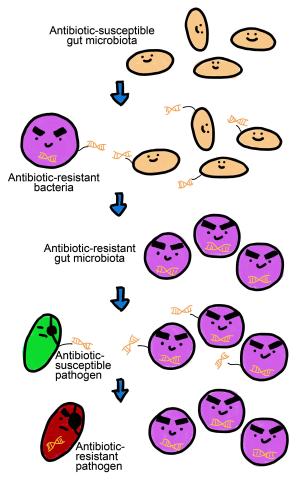 Animal manure contains bacteria such as Escherichia coli (E.coli), Listeria, and Salmonella. While every warm-blooded animal (including people) houses billions of bacteria in their digestive tract, some bacteria can cause disease in humans and other animals. These are called “pathogens.” People can be exposed to pathogens from animal manure through direct contact with raw produce fertilized with improperly composted manure or through contact with water contaminated with pathogens through runoff. There is also an exposure risk from inhalation of airborne contaminants when managing immature compost.

When turning or spreading compost material, fine solid particles and liquid droplets can become airborne. Bacteria and fungi can attach to and travel with those particles. In addition to pathogenic bacteria, another concern is antibiotic-resistance genes and bacteria in untreated animal manure.

In general, applying compost to growing crops should be done to reduce the risk of contaminating the plant with bacteria. It is recommended to:

When handling immature compost, caution should be observed to reduce the risk of inhaling airborne particles. A bacteria of increasing concern is Legionella pneumophila, which causes legionellosis. The symptoms of legionellosis include:

If not treated, the disease can progress and require hospital treatment. In severe cases, people can die from legionellosis. People who develop legionellosis symptoms within 2-10 days after handling compost should see a doctor without delay.

In our studies, besides Legionella pneumophila, we also detected Pseudomonas aeruginosa and Mycobacterium spp., which are opportunistic pathogens. These bacteria take advantage of an individual’s weakened immune system to create an infection of the respiratory system, urinary tract, or soft tissue.

Both Legionella pneumophila and Pseudomonas aeruginosa are resistant to high temperatures. Studies show that they can survive at temperatures higher than 131°F. Therefore, they can still be found in compost samples heated during the process.

Measures need to be taken to avoid inhaling airborne pathogens when working with both immature and mature composts. Airborne pathogens especially affect older people, former or current smokers, people with underlying lung disease, and other long-term health conditions such as diabetes. The measures that should be taken when handling compost include:

In Illinois, livestock mortalities are disposed of according to the Dead Animal Disposal Act.

For information on livestock composting