After hitching their initial ride on imported ornamental plants in 1916, Japanese beetles decided North America isn’t such a bad place to live and have made a presence year after year since. Today, these pests can be a serious nuisance to gardeners and farmers throughout North America feeding on over 300 different species of trees, shrubs, and non-woody plants.

The adult is a colorful beetle 1/3 - 1/2 inch long with a shiny metallic green color and coppery brown wing covers. There is a row of five tufts of white hair along each side of the abdomen and two additional tufts on the top of the abdomen tip.

The larvae are white grubs that take on a grayish cast from the accumulation of soil and fecal matter in the hindgut. They have a characteristic "C"-shaped form, grow to about one inch long, and may be separated from other turfgrass feeding grubs by their characteristic "V"-shaped pattern of spines on the underside tip of the abdomen. The bottom of the V points toward the head and may be seen with a hand lens.

The Japanese beetle has a one year life cycle, spending about 10 months as a grub in the soil. In late June, the first adults emerge with most present in July and August. Some may still be found in early September. Throughout the summer, adult beetles feed on a wide range of plants and deposit eggs in the soil. Eggs hatch about two weeks later and grubs feed on decaying matter and roots until temperatures cool in the fall. They move downward and overwinter as a partially grown grub and resume some feeding activity in spring. Pupation occurs in late spring and adults begin emerging in late June.

Japanese beetles are chewing insects that destroy leaves, flowers and fruits of more than 276 plants. These beetles can completely skeletonize leaves, feed on corn silk and corn ear tips and are especially destructive to grapes, peaches, and other members of the rose family. The grubs feed on grass roots in lawns, parks, golf courses, and cemeteries.

Adults first emerge around the end of June to early July hungry and ready to eat; some of their favorite plants include Japanese maple, rose-of Sharon, roses, grape, cherry, and more. Individual beetles do not cause severe damage; when there are a group of beetles feeding in one area, the damage becomes more severe, and unfortunately, we often see Japanese beetles in groups. Feeding begins at the top of the plant, working downward; with adults chewing out tissue between the veins giving a lacelike appearance.

We can all probably spot damage done by adult beetles; however, damage done by Japanese beetle grubs can be just as much of an issue; grubs chew off grass roots which reduces the ability of the grass to take up water especially during the hot, dry summer weather resulting in large patches of dead grass. Japanese beetles overwinter in the grub stage; as soil temperatures warm to above 50°F in the spring, the grubs begin to move up into the root zone to feed.

There are many different options for managing Japanese beetles.

Good Growing Fact: There is a concern that smashing Japanese beetles will release pheromones which will attract more beetles. Pheromones are used to attract beetles for mating; however, once the beetles have mated, they will no longer produce the pheromones, so it is okay to smash the beetles.

You've got questions, we've got answers 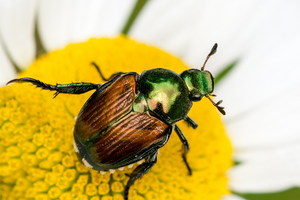 What to Do About Japanese Beetles 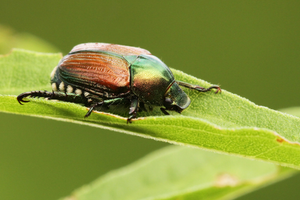 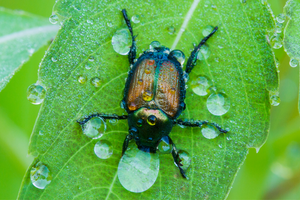 The Facts About Japanese Beetles