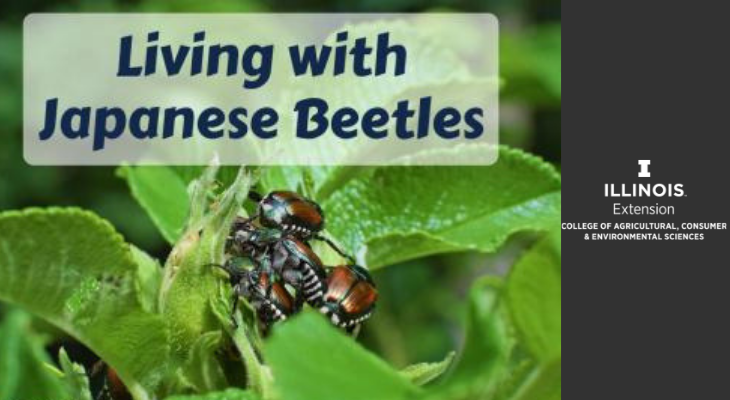 It's about that time of year, time for Japanese beetles...

Japanese beetles are one of the most destructive ornamental pests we have in Illinois. They were first discovered in the United States in 1916 in New Jersey and have been making their way across the U.S. since then. The adults are about a ½ inch long with copper-colored wing covers, shiny metallic green heads and prominent white tufts of hair along their sides. While the larva are c-shaped white grubs that can reach 1¼ inches long. Adults will feed on over 300 different species of plants and the larva will feed on turf roots.

Adults will typically begin to emerge in late June in southern Illinois and in early July in central and northern Illinois and will typically be around for about six weeks. Although, it looks like they may emerge sooner this year (depending on where you live). Some of their favorite plants include linden, rose, crabapple, willow, grape, and raspberry. Adults will begin feeding on the upper, sunlit portions of plants and work their way down. Their feeding damage can cause leaves to appear lacey and when feeding is heavy entire branches can be stripped of leaves. One of the reasons they are so destructive is that they are attracted to plants that have already been damaged. Because of this, large numbers of beetles can be attracted to susceptible plants and why if you can get on top of populations early you often have fewer problems in the long run.

There are several different things you can do to manage Japanese beetles.