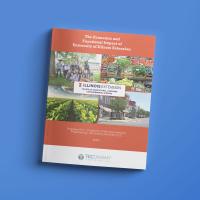 A new report finds that Extension provides more than $600 million of value to Illinois annually, 10 times its budget.

Prepared by TECnomy Partners, LLC, a firm specializing in impact assessments, the report values the annual economic and functional benefits of Illinois Extension at more than $603 million, about 10 times the $60.9 million budget of the University unit in FY 2019.

For more information about this report, contact Stephen Wald at swald@illinois.edu.