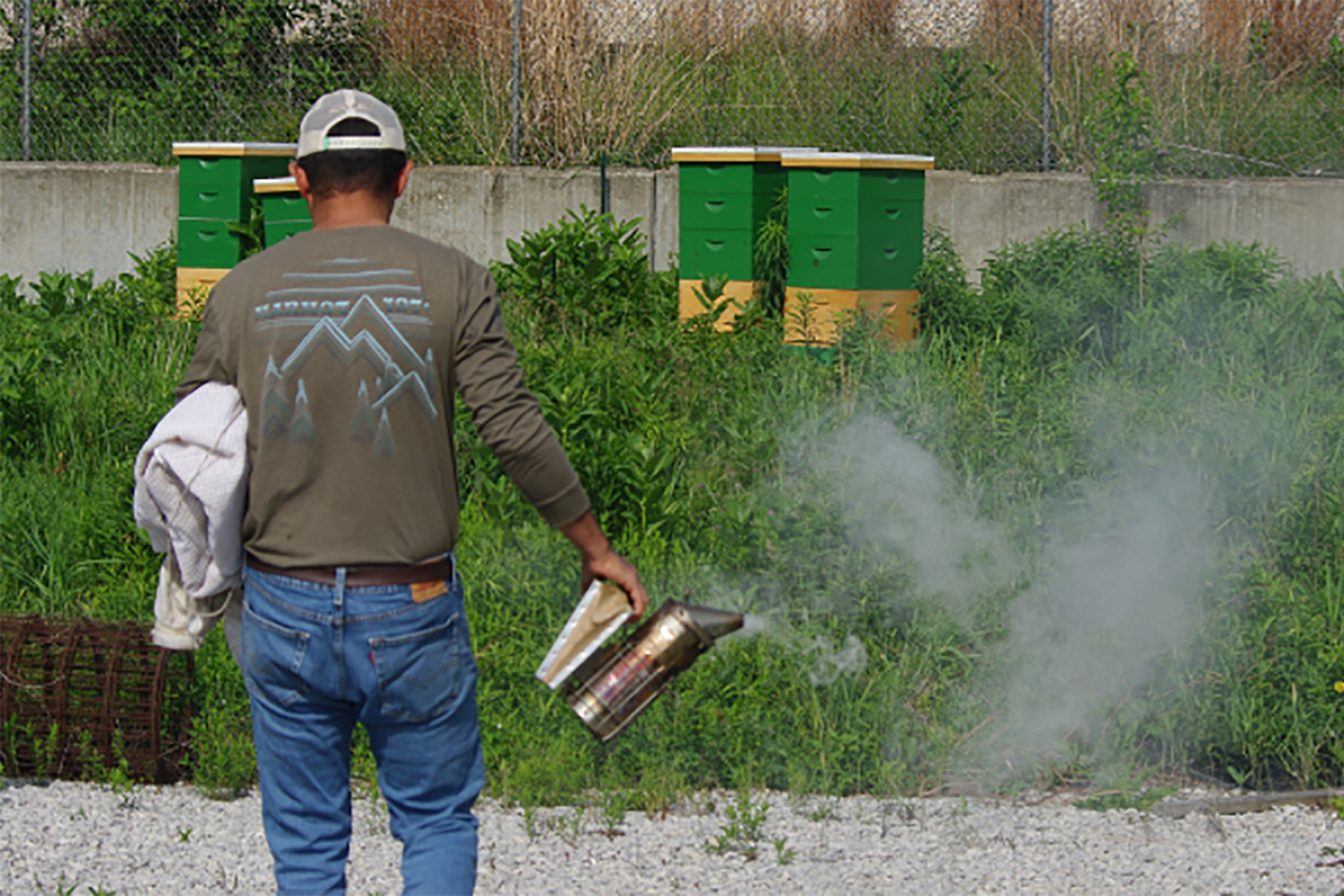 Approaching the hives along the Metra tracks on Chicago’s south side the smell of grass smoke intensifies as Oscar Villa, beekeeper, and owner of Bee-utiful Honey, waves his smoker.

“Don’t worry, come closer. Young bees tend not to sting, and they are the ones busy working in the hive,” he says. “Most of the older bees are out gathering pollen at this time of day. Bees have different jobs based on their age.”

A Metra train bound for downtown Chicago rushes by. We momentarily stop talking. The bees continue their work undisturbed. Oscar smiles, “I love watching bees. It’s like a busy airport with the bees landing and taking off in all directions to travel to parts unknown.”

Oscar, a 2018 Master Urban Farmer Training Program graduate, isn’t afraid of change. Born in Bolivia he came to the United States 20 years ago. While growing up, he helped his mother and grandmother produce food. He even raised 1,000 chickens for market on his grandmother’s land about an hour outside of Sucre, his hometown.

“We would get up at 2 a.m., drive one hour to my grandmother’s, slaughter chickens, and then drive back to the city to sell at market. So really it was my mother’s family that encouraged my interest in producing my own food,” Oscar says.

University of Illinois Extension’s urban farmer program was his first formal training in agriculture. Oscar credits the course with helping him to make connections and develop relationships with other urban farmers, including spaces to put his hives. Since completing the course, Oscar has stepped into a leadership role — speaking at conferences, delivering webinars, and mentoring other urban farms in beekeeping in exchange for a share of the honey or a place to put his hives.

Moving from hobby farmer to a business

In 2013 Oscar began beekeeping as a hobby, gifting the honey to his family and friends.

“I didn’t really take it seriously, but I enjoyed it,” says Oscar. “In 2018, I was attending a friend’s funeral and it hit me that life is short, and I needed to spend it doing something I love."

So, after graduating from the Master Urban Farmer Training program in 2018, he commercialized his hobby by expanding from two to five hives. The bees produced 350 pounds of honey, which he sold at a friend’s farmers’ market stand.

In 2020, Oscar had plans to expand his production to 40 hives and had approached his boss at the hotel where he works to see if he could take some time off during the busy beekeeping months of May to July to manage his expansion. His request was denied. One week later the hotel was shut down due to the COVID-19 pandemic and everyone was sent home. Oscar now had the time he needed and the added incentive to earn an income from his business.

Making a plan to get into the beekeeping business

Now, Oscar is managing more than 80 hives in urban farms, gardens, and rooftops around Cook County. Occasionally, his wife or mother helps when he needs a second pair of hands. His long-term vision for the beekeeping business is to create full-time employment for himself, and perhaps one full-time worker or paid apprentice.

This financial goal setting is an important first step in creating a business plan. To set the goal, a farmer should carefully consider non-farm family living expenses such as food, clothing, transportation, entertainment, medical expenses, and saving for retirement.

In July, Oscar returned to work at the hotel for the first time in more than a year. He doesn’t expect it will be operating at full capacity so he’s optimistic he’ll have time to manage his hives.

Oscar credits some of his ability to double his operation each year to writing a business plan and analyzing his farm finances to see how he could improve. A business plan doesn’t need to be complicated, it just needs to be done and often redone as things change on your farm. It can help farmers get a loan and provide space to carefully consider if what you are attempting to do makes sense.

Over the past two years, Oscar has adjusted his business plan to accommodate his expansion and long-term investment in new hives. With good care and maintenance, each hive will last at least 10 years, possibly 20, thus spreading this investment cost across many production seasons.

Another adjustment to his plan came about when Oscar calculated that he drove to California and back twice while tending his hives, some of which are up to 80 miles away, in 2020. When doing his taxes his accountant pointed out that gas was not his only expense as all those miles put additional wear and tear on his vehicle. Driving time also has a labor cost. While the vehicle depreciation could be deducted from his business taxes, the large gas and labor expense time led Oscar to find sites able to host 10 hives each within a 30-mile radius of Chicago. However, “finding a site can be tricky because not everyone wants to live near bees,” notes Oscar.

Oscar is hopeful for his future and feels his biggest success so far is that he turned his hobby into a business with sales at four farmers’ markets, a professional website, an active Instagram account, and a business plan. He’s looking forward to future seasons with 120 hives and employment as a full-time beekeeper. As for the future of bees, Oscar says, “Bees need nature. Conservation is key.”

To learn more about bees visit the Bee Lab at The Ohio State University.

MEET THE AUTHOR: Kathryn Pereira is a local food systems and small farm educator serving Cook County. Raised on the southside of Chicago, her career in agriculture began in 1990 in Mozambique. Later, she owned and operated an organic vegetable farm in New Hampshire before returning to the Midwest to earn her Master of Science in Agricultural and Applied Economics from University of Wisconsin–Madison. She regularly volunteers with USAID’s Farmer-to-Farmer Program in southern Africa and is passionate about improving small farmers’ income and quality of life as well as consumers’ access to local foods. She provides workshops, technical assistance consultations, site visits, and referrals to resources for urban and peri-urban food system projects, organizations, commercial farmers, and residents interested in urban agriculture and local food systems.