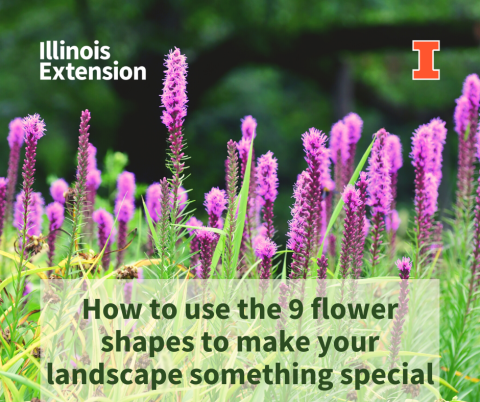 Flowers come in a variety of shapes. There are, in fact, nine distinct kinds: daisy, cup, spike, cluster, globe, flathead, filler, plume, and trumpet. Just as specific colors can influence the mood of a flower bed, so can flower shape.
We are all familiar with the daisy shape of many common flowers, including Shasta Daisy, Rudbeckia, and Echinacea. They are comprised of a central disc surrounded by petals radiating out from the disc and are the mainstays of an informal, casual cottage-type garden.

Cup flowers also lend a relaxed feeling. The petals are usually rounded and pulled into a cup shape, often but not always facing upward. Oriental Poppy, Tulip, and Campanula are good examples.

Are you looking for an attention-getter? Use a spike-shaped flower. They add height and a formal feeling to the garden. It is hard to ignore Salvia or Liatris (gay feather, spike blazing star) with their column of color.

Eyes are drawn to cluster flowers with their mass of color, and they can look solid like Phlox paniculata or airy like Cleome (spider flower). Cluster flowers work well in combination with other shapes.

It is impossible to ignore a globe flower in the garden if you are looking for something similar but more dramatic than clusters. They stand erect and seem to shout, “Hey, look at me!”. Two examples are Allium and Agapanthus (lily of the Nile). The former is tightly packed, while the latter is looser.

Everyone loves flathead flowers, including pollinators, because they come with a built-in landing platform. If you are looking for some calm among busier shapes, choose Yarrow, Queen Anne’s lace, or Autumn Joy Sedum. Flathead flowers are also called umbrels because they are shaped like an open, flat umbrella.

Fillers provide transitions between other plant shapes. They have an airy feeling with thin stems covered in tiny flowers: Picture Baby’s Breath or a similar but heftier plant, Diamond Frost Euphorbia.

Plume-shaped flowers are broader at the base, coming to a point at the top. They often possess fuzzy-looking plumes like Celosia and Astilbe, and they can be a transition plant between other shapes.

Finally, there are the trumpet flowers. Not only are they dramatic, but also elegant. They seem to soften formal gardens but can also be used to add structure to cottage gardens—a shape for everyone and everywhere. Lilies and daylilies are trumpet flowers.
I just realized I have all shapes except plume in my yard. I will rectify that oversight this growing season.

The Illinois Extension Master Gardeners of Edgar County can answer your gardening questions. Call us at 217-465-8585.