The spice is right? Researchers explore growing ginger in Illinois 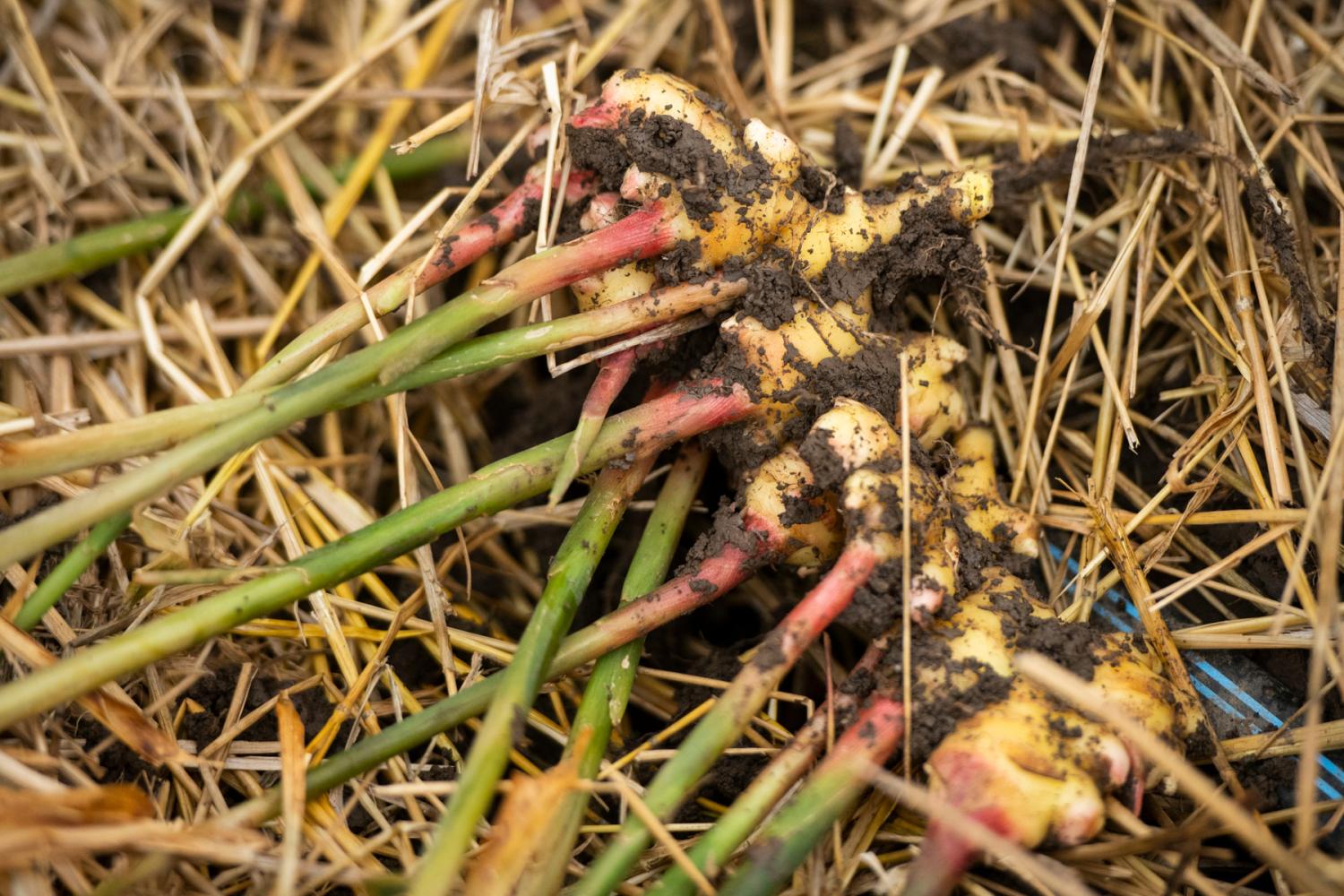 Ask an Illinois farmer what specialty crop to grow to get the most bang for their buck and they will likely say tomatoes. Ask Chris Enroth, and his answer might surprise you – ginger.

This tropical plant may seem out of place in a state known for growing row crops, but its flavorful, golden root could be the solution to a plant disease problem for farmers who grow tomatoes. That’s what University of Illinois Extension Horticulture Educator Chris Enroth hopes to find out with a research project in partnership with Western Illinois University that is supported by a $47,000 grant from the Illinois Department of Agriculture.

In Illinois, specialty growers often use high tunnels, stationary covered structures that are heated by the sun, to get a jump start on planting in the spring and a longer harvest period in the fall. High tunnels can be expensive, so farmers need to grow a high-value crop in them that provides a return on their investment.

Commercial and public consumers are willing to pay for fresh, locally grown tomatoes. But growing any plant on the same plot year after year puts it at risk of harvest-ruining diseases. Another high-value product is needed for crop rotation.

That’s where Enroth sees potential in ginger, Zingiber officinale. He says demand for fresh ginger is so strong that it will sell for the high price of $20 a pound in some markets.

Can ginger be grown in Illinois?

But ginger has not been grown before on a large scale in Illinois or even regionally. Farmers are not likely to invest in a new crop if they don’t have information on how to make a profit growing it.

Curious about the prospective crop, Enroth experimented with growing ginger at home starting in 2015. He then began working with Dr. Shelby Henning, Agriculture Assistant Professor at WIU. Backed by a grant from SARE, the Sustainable Agriculture Research and Education program, they worked with a local grower who brought the freshly grown ginger to Central Illinois farmers markets. They sold out.

“She sold it at the market for $24 a pound which surprised me,” says Enroth, adding that customers buy it by the ounce. “That’s comparable to tomatoes and you can make some decent money off it.”

Americans have a taste for ginger

A key ingredient in ginger cookies and ginger ale, demand for this staple in worldwide cuisine is growing. Some of the first ginger Enroth and Henning grew was donated to Forgottonia Brewing in Macomb to brew a “Test Plot Tripel.”

Of all the ginger grown worldwide, 18% is imported to the U.S. However, the need for a local product became clear as global supply chains have been disrupted by the COVID-19 pandemic.

“The ginger you buy in your grocery store is grown on the other side of the planet in India,” Enroth says. “What if we could provide a locally grown fresher option?”

Through a network of partnerships and local growers, Enroth and Henning have spent several years researching ginger. This summer, they’re exploring alternatives to growing in high tunnels at six test sites in Central Illinois.

While ginger is a tropical plant, it does not grow well in extreme temperatures. High tunnels can reach 120°F in the summer. They will plant ginger caterpillar tunnels, which are more temporary structures, removing the plastic cover and replacing it with a shade cloth when temperatures get too high.

Only time will tell if the spice is right for Illinois farmers, but each growing season gets researchers one step closer. Enroth and Henning have consulted with ginger specialists in other states and plan on sharing their methods and results at demonstration sites, field days, conferences. They also hope to develop a ginger growing guide that outlines best practices for Illinois.

Anyone interested in learning more about growing ginger can watch Enroth’s presentation “Growing Ginger, Turmeric, and Other Unique Crops”. Enroth can be contacted at cenroth@illinois.edu or (309) 837-3939.