Is there lead in your soil? New Chicago-area map tells you 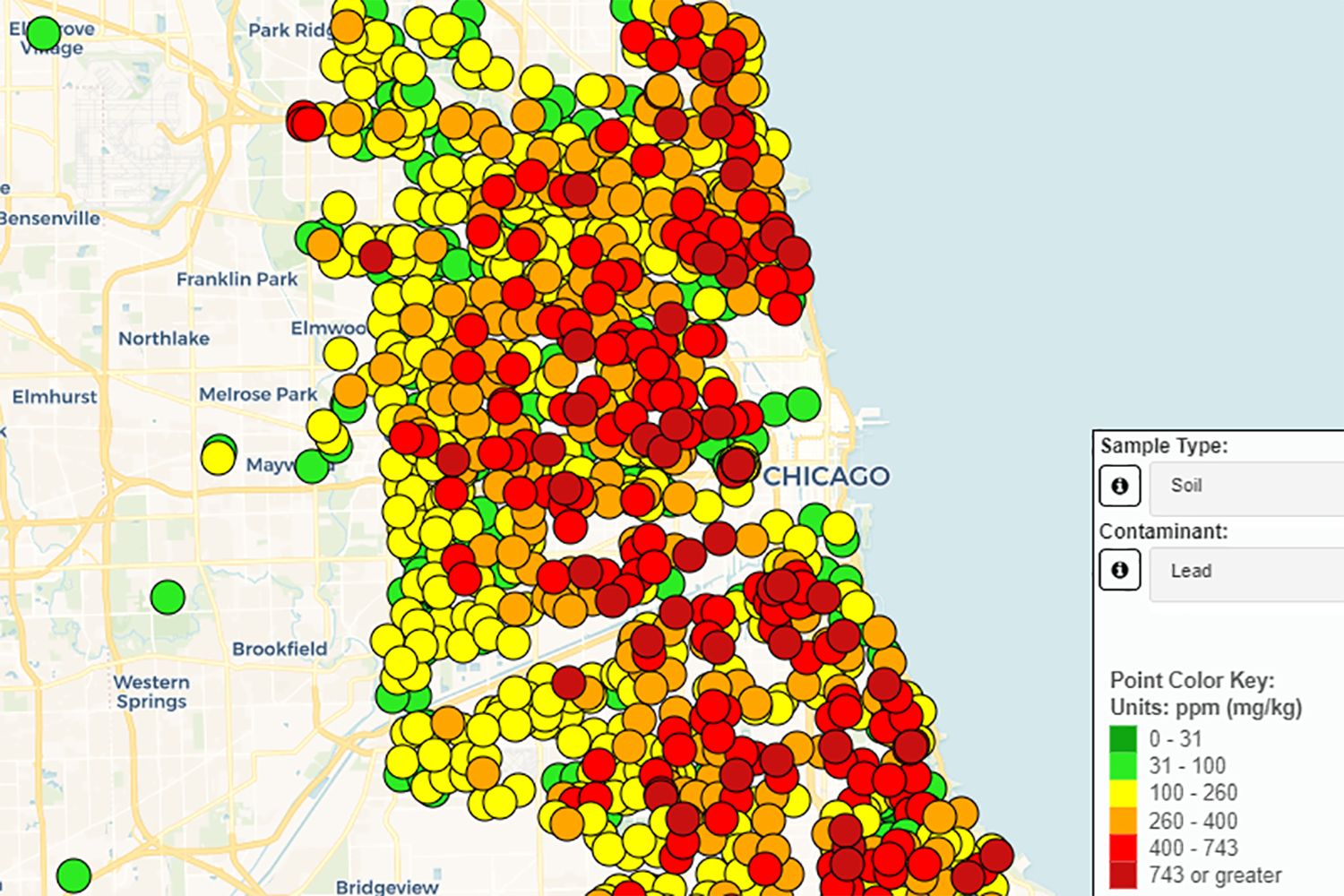 In backyards and community gardens across Chicago, growers tend fruit and vegetable crops as diverse as the city they live in. Most have one thing in common – lead lurking in the soil.

Legacy lead, leftover from paint, gasoline, and other sources, lingers in the environment. Lead poisoning is a health concern for children and may cause delayed brain development. In high-risk areas, playing in mud puddles, running through dusty yards, and helping in the family garden can expose children to lead in the soil.

Now, for the first time, communities have access to a city-wide map showing how much lead is in the soil where they live.

Mapping lead levels is the first step in understanding contamination risks in urban food production says Andrew Margenot, assistant professor in the Department of Crop Sciences at University of Illinois.

Starting in 2018, Margenot partnered with Zack Grant, a University of Illinois Extension Local Foods Small Farms educator in Cook County, and Chicago-based Advocates for Urban Agriculture to gather soil samples as part of the Chicago Safe Soils Initiative. By offering free soil tests, they were able to map thousands of submitted and gathered samples from parkways and yards across the city.

The average amount of lead in the soil was 220 parts per million (ppm) which is 11 times higher than the natural level of 20 ppm. According to the study, 20% of the city’s soils are higher than 400 ppm.

“This research is important for those participating in urban gardens and farm systems,” says Shelly Nickols-Richardson, associate dean and director of Illinois Extension. “Taking the time to collect all the samples and provide the analyses resulted in an incredibly valuable resource for these communities.”

Environmental agencies nationwide have different standards for what soil lead levels are a risk to human health. The Illinois Environmental Protection Agency follows the federal EPA rate of 400 ppm, while the California EPA has a more cautious rate of 80 ppm.

How to use the lead map

Contamination is an Environmental Justice Issue

The map also shows how soil contamination is an environmental justice issue. Some south-side neighborhoods had soil lead levels of more than 1,000 ppm.

“This is the ugly story of industrialization in this county. A lot of Black Americans were forced to live in highly industrialized areas of the city which typically had high levels of contaminants in soil, water, and air.”
- Andrew Margenot, University of Illinois crop scientist and lead researcher

With urban gardening and farming on the rise in Chicago, researchers also wanted to explore how much lead fruit and vegetables absorb from the soil. Current research-based recommendations focus on washing and peeling produce to remove dirt and dust from the surface, not the produce itself.

To test this, Margenot and Illinois Extension staff recruited local growers for on-site experiments. Researchers added the nutrient phosphate to the soil and planted tomatoes. The fruits from the phosphate-rich soils did not have different levels of lead, but the results show that food crops can be safely grown in high lead level soils, even up to 1,200 ppm. “We still don’t find detectable amounts of lead in the fruit that would prove a human health risk according to FAO/WHO,” Margenot says.

These results will direct future research on different crops and soils and eventually lead to new guidelines for growers.

For information on how to take a soil sample and where to submit it, contact your local county Extension office at go.illinois.edu/ExtensionOffice.

This project is funded by an Extension Collaboration Grant. First launched in 2018, grants are part of an ongoing effort to connect campus-based researchers and University of Illinois Extension field staff to do applied research projects that will improve the quality of life of Illinois residents. The grants – which focus on addressing critical issues in food, economy, environment, community, and health – returned again in 2020. Illinois Extension and the College of Agricultural, Consumer and Environmental Sciences provided 17 grants in the current round of funding with financial support from University of Illinois’ Office of the Provost Investment for Growth Program.