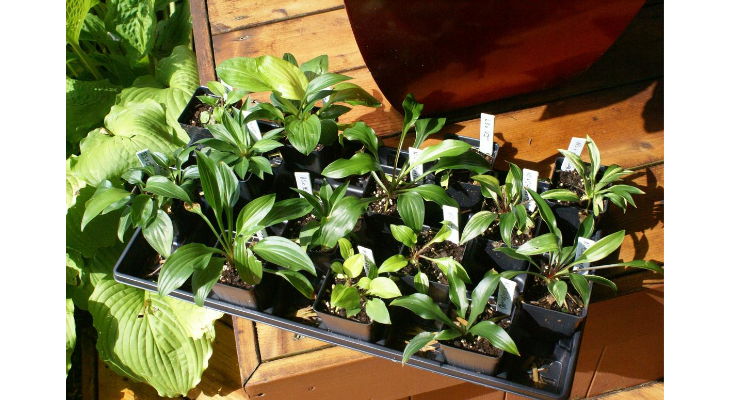 Plants in the genus Hosta, collectively referred to as hostas, are one of the premier plants for ornamental gardens that lack full sun.  These resilient perennials are a mainstay of Midwestern shade gardens and remain popular in temperate regions worldwide. However, that wasn’t always the case, leading many folks to source hostas from fellow gardeners or grow their own.

Recently I visited with some local hosta enthusiasts to get their perspective on hosta gardening and learn more about how they became interested in hosta breeding.  Barb and Rick Schroeder have been growing hostas for several decades now. In fact, Rick is a self-described “hosta-holic” and over the years the couple has gone from interested gardeners to collectors and hybridizers of hostas.

“When we first started out with hostas, about the only way to get them was from a friend who divided theirs,” recalls Barb. “If you could find them for sale, they were expensive.”

Out of necessity, the Schroeders began growing and dividing their own hostas to build up their collection.  Along the way, they started experimenting with hybridization by directly hand-pollinating flowers.

“We started learning just by watching friends,” said Barb.  “It really isn’t that hard and I have had a lot of fun playing “bee” for these wonderful plants”.

By carefully selecting which plants to pollinate, the Schroeders have experimented to create new plants with interesting characteristics.

“I have been breeding to get red petioles on leaves, but some hybridizers breed to get red flowers, some hybridize for yellow leaves, some look for wavy or big leaves,” Barb notes. “It’s all based on your personal preferences.”

From an ornamental perspective, hostas really have a lot to offer. They are primarily planted for their foliage, which can range from a deep, waxy blue to a bright yellow that approaches the brilliance of a highlighter. Many varieties have been bred for a variegated leaf, creating beautiful two-toned foliage in an assortment of colors and patterns.

Since foliage is their primary interest, these plants provide beauty and texture for a large part of the growing season, as opposed to many plants that have less interest after a short period of bloom. But do not underestimate their flower display. Blooms typically appear around late spring or summer on scapes that rise above the foliage to display spikes of lavender to white, bell, or funnel-shaped flowers.

Hostas rise to popularity started in a lab

By the 1980s, hostas had become popular shade plants with widespread cultivation across the U.S. and greater availability than previous years. Somewhere around this point in hosta history, a new form of production began to gain popularity as growers started to propagate hosta using tissue culture. The rising popularity of this method over the '80s and '90s would change the hosta world forever.

Tissue culture propagation is done under sterilized lab conditions by taking a tiny piece of root tissue and carefully developing it into a plant that is a genetic copy of the mother plant. Labs sprung up around the globe to help keep up with the demand for more hostas resulting in an explosion of new hostas varieties and wide availability to most gardeners.

“From the time they tissue culture in the lab, it’s a minimum of three years to get a plant of any notable size,” says Rick.

As anyone who grows hostas can attest, it takes many years of growth before a plant can be divided, which is the most common form of propagation for hostas and many other perennials, to produce more planting stock. Although tissue culture is also a slow-going process, it has greatly increased hosta production by allowing growers like the Schroeders to get a lot more plants in a lot shorter time.

Over the years, the Schroeders have developed four new hosta hybrids of their own, which they have registered with the American Hosta Society. Their process begins with seeds from flowers they hand-pollinate, which take two to three years to mature and reveal the traits gained from hybridization. From there, the mature plants can be grown for another year or two and divided to make a new plant or two, or tissue cultured to create hundreds of new plants in one shot. The process is long from carefully pollinated flowers to mature plants, but it is truly a labor of love for the Schroeders.

Special thanks to Barb and Rick for their input on this article and their dedicated service in both the Master Gardener and Master Naturalist programs.

Are you interested in learning more about hostas? Join the Illinois Prairie Hosta Society to connect with other interested growers and learn from local experts. More information is available at www.illinoisprairiehostasociety.com.