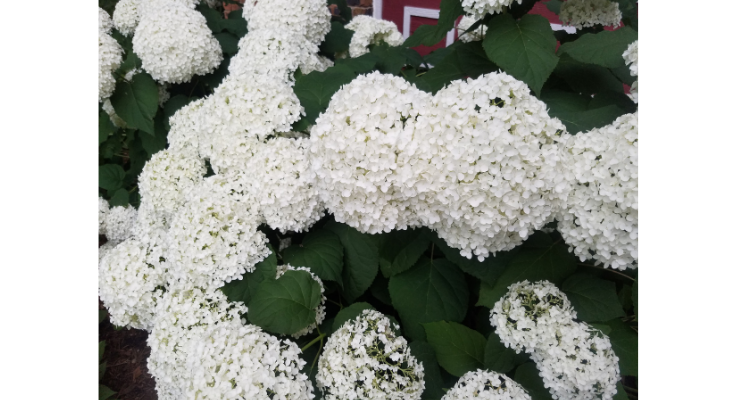 The ‘Annabelle’ hydrangea has been a mainstay of the ornamental shrub world since its release in the 1960’s.  This showy shrub is filled with beautiful snowball-like flowers that adorn its spindly branches each summer.  The blooms begin as pretty green puffs that turn white at maturity, often lasting 6-8 weeks throughout June and July, and gradually changing to a tan color to provide interest throughout fall and winter.

‘Annabelle’ remains one of the most popular cultivars of our native smooth hydrangea (Hydrangea arborescens), appearing throughout the eastern US in landscapes from Zone 3-9.   Despite its national-level popularity, the ‘Annabelle’ hydrangea has roots very close to home, with origins right here in Illinois, making it one of my favorite shrubs for the home landscape.

Smooth hydrangea makes an excellent landscape plant, not only for its beauty, but for its adaptability as well.  It prefers partial shade, but does well even in full sun if soil moisture is sufficient.  While it prefers a rich, moist, yet well-drained soil, it will tolerate a wide range of conditions, lending its use to wide variety of landscape applications from a single specimen to a border or mass planting,

The story of the ‘Annabelle’ hydrangea begins in southern Illinois near the town of Anna.  In 1910, Harriet Kirkpatrick, of the renowned Kirkpatrick Pottery Company (which has a story all of its own), went on a horseback ride along a wooded trail in Union County and noticed a beautiful native hydrangea with abnormally large, snowball-like blooms.  Together with her sister-in-law, Amy Kirkpatrick, she went back to dig up the native shrub and transplant it into her yard in Anna.  Neighbors and friends noticed the showy plant and the Kirkpatrick family shared specimens of the easily transplantable shrub, spreading its progeny throughout Anna and other towns in southern Illinois.

Given its wide local popularity, easy transplanting and culture, Mrs. Kirkpatrick contacted the Burpee Seed Company to see if there was interest in developing the new variety commercially.  Unbeknownst to the Kirkpatrick’s, a recent improved cultivar of Hydrangea arborescens was just released in 1906.  E. G. Hill brought the ‘Snowhill’ hydrangea into production from a wild specimen found near Yellow Springs, Ohio with similar abnormally large, snowball-like flowers, but an earlier bloom time.

So, for the next 50 years, ‘Annabelle would be an unnamed, but locally poplar cultivar, that was distributed by word of mouth throughout the southern Illinois region, finally reaching Urbana around 1935, based on the first recorded account.

It wasn’t until the 1960’s that the Kirkpatrick’s find gained the attention of University of Illinois professor and renowned plantsman, Dr. Joseph C. McDaniel.  In 1960, McDaniel rediscovered ‘Annabelle’ by noticing it in cultivation in Urbana, IL.  He somehow traced it back to Anna, IL, collected samples for propagation, named the cultivar and released it for commercial production in 1962. In a paper submitted as conference proceedings that same year, McDaniel recounts the story of ‘Annabelle’ noting it as, “the best form of its species yet found.”   The name ‘Annabelle’ is a nod to the Kirkpatrick “belles” from Anna that originally discovered the wild specimen.

‘Annabelle’ is considered a “nativar” by many, meaning it is a cultivar (or cultivated variety) of a native species, bred or developed for increased ornamental value.  In the case of ‘Annabelle’, an individual wild grown plant mutated to express genes for more showy flowers than other individuals within the species.  By propagating this individual, horticulturalists like McDaniel can select for those genes and created a new cultivar of Hydrangea arborescens with larger flowers and greater ornamental appeal.

However, some important characteristics that support biodiversity can be lost when horticulture selects for ornamental value over naturally occurring traits of a species.  Many gardeners interested in native plantings to support wildlife are beginning to shy away from nativars since many may have a realized (or unrealized) loss of biological value and function.

‘Annabelle’ is one example of a nativar that does have a lowered biological value due to its newfound ornamental traits.  Hydrangea arborescens, the true species, essentially has two types of flowers within each inflorescence.  The larger, more showy flowers are actually sterile flowers with significantly less value to pollinators.  The less showy, smaller flowers hold the intrinsic value for pollinating insects, but are entirely absent on ‘Annabelle’, effectively reducing its wildlife value in exchange for a more attractive flowering plant.

Not every nativar loses value for wildlife, but it’s hard for the average gardener (or the expert horticulturist) to discern the faunal relationships that may be inadvertently lost.  Your best bet is to focus on the truly native species as opposed to a nativar, but who can pass up the beauty of an ‘Annabelle’ hydrangea in full bloom?

I have choose to strike a balance in my landscaping, attempting to provide a distribution of native species right along with their nativar cousins.  My hope is the overall diversity within my garden will be of great enough benefit to outweigh any losses incurred for the sake of ornamental appeal.

For a live and interactive discussion of hydrangeas, join me and the other co-hosts on LIVE with the Horticulturists at noon on Wednesday, April 22 on Facebook Live.  The show will feature audience questions and a discussion about everything you need to know to keep your hydrangeas happy and healthy in 2021.  Access the live show on April 22 at: https://www.facebook.com/UIExtension.  Or, view the archive of our past shows at: go.illinois.edu/FacebookLive.