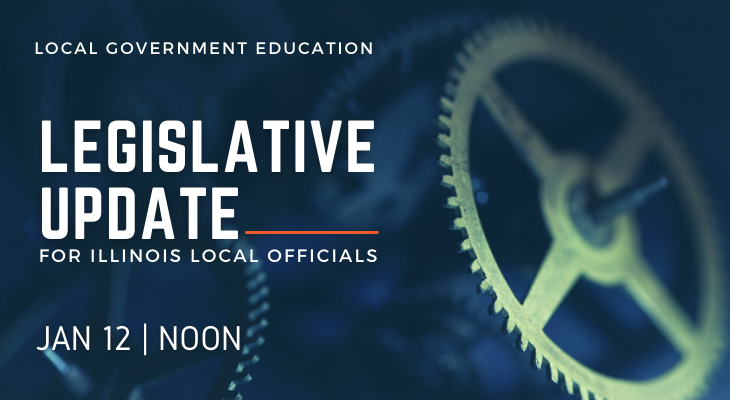 Join host University of Illinois Extension as Illinois Association of County Board Members presenters, Kelly Murray and Taylor Anderson cover recent and potential changes in state legislation and implications for local governments. Participants will have the opportunity to ask questions during a Q&A session at the end of each presentation.

Presented by: Kelly Murray and Taylor Anderson, Illinois Association of County Board Members

Kelly Murray has served as Executive Director for the Illinois Association of County Board Members since 1997. She is a registered lobbyist, has served on several state boards, and has over two decades of experience in local government relations, having also served as executive director for the Illinois Association of Regional Councils, legislative consultant for the Taxpayer's Federation of Illinois, and editor of County to County magazine, working in collaboration with 12 local government state associations. In 2006, Kelly established the Counties of Illinois Risk Management Agency (CIRMA), a protected self-insurance risk management program that is exclusively owned and managed by Illinois counties. She is also a founder of the Institute for Excellence in County Governance in partnership with the University of Illinois and a contributing author of "Tomorrow's Leaders" civic curriculum aimed at teaching high school students about local government.

Recently, Kelly administered the Illinois Energy Now Public Sector program in partnership with the Illinois Department of Commerce and Economic Opportunity (DCEO), Ameren Illinois, ComEd, and NICOR providing incentives and rebates to local governments for completion of energy efficiency projects. In relation, she administered the Federal ARRA Energy Efficiency and Conservation Block Grant Program through DCEO, which allocated over $11 million in funding to 273 county projects throughout Illinois. The innovative, state-led approach to grant administration and delivery through local regional councils was viewed as a model for government officials nationwide.

Taylor Anderson, a full-time, registered, contractual lobbyist in the State of Illinois, has spent nearly a decade working with the Illinois General Assembly. He has lobbied on behalf of wide and diverse groups of clients including various COG’s and local governments, as well as numerous business entities and corporations. Taylor began his legislative training by interning at several state agencies including Secretary of State Jesse White’s Office, the Illinois Senate President Emil Jones Revenue Committee, Illinois Environmental Protection Agency Legislative Affairs Division, and the Dunn Fellowship serving in the Legislative Office of the Governor, where he helped design and author the bill tracking training website for state agency liaisons. He also worked closely with top State Agency heads and members of the Illinois Senate.

Prior to lobbying, Taylor worked with the Illinois Chamber of Commerce Government Affairs Division, where he analyzed voter precincts and researched and authored Chamber Position papers. He also worked with the Illinois Association of County Board Members and Commissioners, organizing seminars for county officials and contributed to various media forums and publications. Since 2008, Taylor has traveled across the state speaking on the impact of various legislation and legislative issues, specifically legislation affecting Illinois counties.