Carbon may soon be stored in Illinois' underground rock 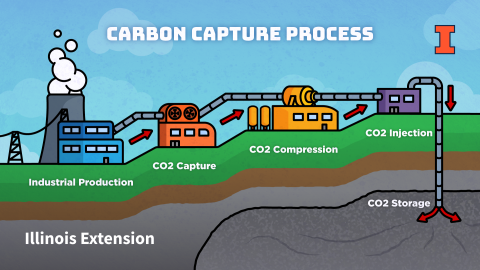 Storage of CO2 is also not new.

"Illinois was the first to develop a carbon dioxide storage system from industrial sources," says Duane Friend, University of Illinois Extension natural resources, environment, and energy educator. "Geologists and engineers from the U of I Prairie Research Institute and the Illinois State Geological Survey have been working on these methods for over 20 years."

"Researchers and engineers, working with ADM, closely monitored the capture, injection, and observation of the Decatur-based site," Friend says. The carbon dioxide was pumped more than a mile under ground.

The Intergovernmental Panel on Climate Change (IPCC) estimates more than 1,500 miles of pipeline in the United States currently carries carbon dioxide, with some of the pipelines in operation more than 40 years.

"Most of this infrastructure has been used to aid in oil and gas extraction," Friend says.

Why store carbon dioxide in Illinois?

"Hundreds of millions of years ago when Illinois was part of a shallow sea, huge amounts of coarse sediments were deposited that eventually became sandstone," Friend says. The Mt. Simon sandstone layer lies from 5,000 to over 7,000 feet below ground under much of central and northern Illinois.

"This rock layer, 500 to over 2,500 feet thick, is porous enough to accept liquid CO2, but not let it travel very far from the point of injection," Friend says. "Multiple layers of impermeable rock above it keeps the CO2 from migrating upward, much like trapped oil and gas that is closer to the surface."

How does the extraction work?

Friend explains that In the Archer Daniels Midland operation, carbon dioxide is captured and compressed; then, the water is removed. It enters the pipeline at an injection well on the surface, before being pumped and injected into the sandstone.

"This procedure should be considered just one of many options to reduce atmospheric CO2 emissions, which adds 35 billion metric tons of carbon dioxide to Earth's atmosphere each year," Friend says.