Mountain lions on the move through Illinois, not here to stay

URBANA, Ill. – Mountain lions have been on the move this fall with two confirmed sightings of animals in northern and central Illinois. Large predators occasionally pass through Illinois but are not here to stay.

The Illinois Department of Natural Resources reported on Oct. 17 that a mountain lion, also known as cougars, had been struck and killed by a vehicle on I-88 in Dekalb County. Another young male mountain lion was tranquilized by the IDNR on Oct. 28 on the western edge of Springfield and relocated to a sanctuary in Indiana. Officials had been tracking its movements through a GPS collar that was attached last fall by researchers in Nebraska.

Mountain lions are protected and it is unlawful to hunt, kill or harass them unless they pose an imminent threat to a person or property, which is rare.

Black bears, wolves, and cougars are rare but not unheard of in Illinois. These large predators were extirpated from Illinois in the late 1800s as natural habitats changed and white-tailed deer were hunted nearly to extinction in the Midwest. The big cats have regularly reappeared over the past few decades, with many sightings coming from the increased public use of trail cameras. 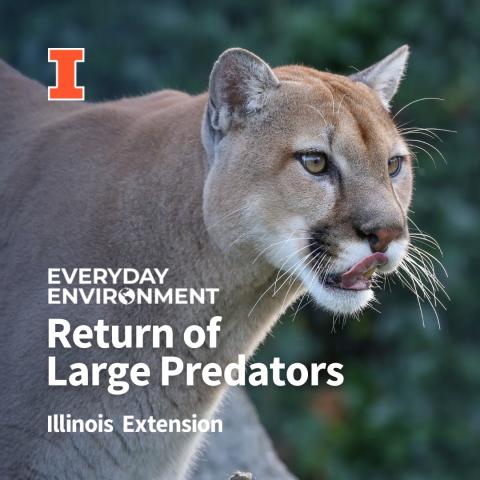 “These animals periodically wander into our state which is exciting, but most of Illinois does not have the habitat to support populations so they will continue to move on,” says Peggy Doty, University of Illinois Extension natural resources, environment, and energy educator.

Doty recently led a program, available at go.illinois.edu/ILlargepredators, about the return of apex predators exploring behaviors, ranges, and identification.

Mountain lions, also known as cougars and pumas, were historically found across North America but are now primarily in the western states. Young male mountain lions wander large distances as they look for a forested territory of their own. Their minimum home range is about 70 square miles. DNA testing of cougars previously found in Illinois showed they were originally from the Black Hills in South Dakota.

“Apex predators are crucial to maintaining the overall health of natural systems,” Doty says. “Illinois now has a large population of white-tailed deer due in part to the lack of predators.” While predators are an important part of the ecosystem and research from the Illinois Natural History Survey shows people in Illinois have a neutral stance on their recolonization, Doty says there are no plans to reintroduce them to the state.

Illinois does not have sufficient habitat to support stable populations of these large predators. Southern Illinois has the most contiguous forest in the state but still could not support many mountain lions, says Joy O’Keefe, University of Illinois Natural Resources and Environmental Sciences Assistant Professor and Extension wildlife specialist. To coexist with large cats and other predators is a matter of tolerating them during the periods when they visit our state.

"We’ll need to learn how to live with them during the periods when they move through – adopting anti-predator behaviors, such as keeping pets and children indoors or under supervision if near locations where the animals are seen," O'Keefe says.