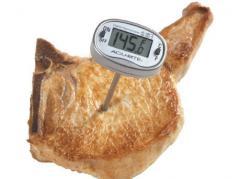 URBANA, Ill. – When selecting a pork chop from the refrigerated case, consumers primarily choose based on color and marbling. But, according to a recent University of Illinois study, those factors don’t make much difference when it comes to flavor, tenderness, and juiciness – the overall eating experience. Instead, cooking temperature is nearly all that matters when it comes to a delicious pork chop.

Late last year, the USDA’s Agricultural Marketing Service proposed a quality grading system for pork similar to the one consumers are used to for beef. They know consumers make purchasing decisions for beef based on color and marbling, so they used those metrics to define prime, choice, select, and standard grades for pork.

Meanwhile, meat scientists at U of I were working to determine which of these factors made for the best eating experience. Color, marbling, or degree of doneness?

“We selected loins that ranged from very dark and very marbled all the way to very pale and poorly marbled. We cut the loins into a whole series of pork chops, assigned them to proposed USDA quality grades for pork, then cooked them to the previous recommendation of 160 degrees or the new recommendation of 145,” says Dustin Boler, meat scientist in the Department of Animal Sciences at U of I and corresponding author of the study published in the Journal of Animal Science.

“Color and marbling doesn’t matter. Degree of doneness does. Cook them to 145, and you can make a very tasty, very juicy pork chop.”

In a quasi-blind taste test – pork chops were illuminated under red lights to mask the look of each chop – tasters consistently gave high tenderness and juiciness ratings to chops cooked to 145 degrees F, regardless of quality grade.

“If you eat pork and think it’s just okay, but not great, then use a meat thermometer. What are you cooking it to? If you’re cooking it to 160 and above, then back off a little bit,” says Anna Dilger, also a meat scientist in the animal sciences department at U of I and a co-author on the paper. “Cook it to 145, let it rest for about three minutes, and it will be better. And we’re not talking a little bit better, but actually much, much better.”

Boler and Dilger say consumers have been slow to catch on to the new cooking guidelines because of food safety fears held over from older generations that no longer reflect current conditions in the swine industry.

“The trichinella parasite was a problem in the 1920s and 1930s, our grandparents’ generation. But then they taught our parents how to cook, and our parents taught us. People have the idea that pork chops have to be tough and dry to be safe. I’d say most of the pork being cooked in people’s homes is not being cooked to 160. It’s probably 170-180,” Dilger says.

Today, swine production processes are very different from the 1920s. Pigs from virtually all name-brand packagers are housed indoors, fed very specific diets, and are monitored constantly for overall health. Conditions at the packing plant have changed with the times too, with improved handling practices and faster chilling technologies.

“Right now, in the U.S. pork supply, we don’t have a trichinella problem. The Food Safety and Inspection Service tested the pork supply repeatedly for something like 15 years before making the recommendation to cook to 145,” Dilger adds.

So, next time you’re at the grocery store, don’t spend too long agonizing over which pork chop looks the best. “If you cook it to 145, it’s going to be tender, juicy, flavorful, and safe,” Boler says.

The article, “Effect of packaging type during postmortem aging and degree of doneness on pork chop sensory traits of loins selected to vary in color and marbling,” is published in the Journal of Animal Science [DOI: 10.1093/jas/sky084]. Authors include Brandon Klehm, D. Andy King, Anna Dilger, Steven Shackelford, and Dustin Boler. The study was funded by the National Pork Board.