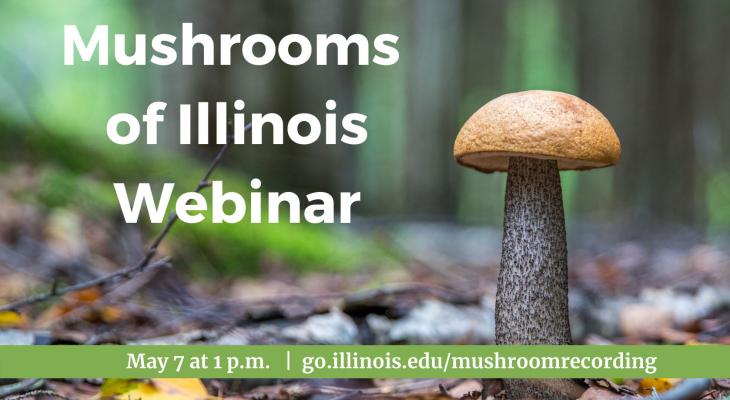 Many Illinoisans enjoy adventures in the woods in search of mushrooms, typically in the spring. Participants in the recent Mushrooms of Illinois webinar, or those who watched the recording, learned from Dr. Andrew Miller that mushroom hunting can be done year-round. The University of Illinois Extension webinar reached over 150 guests during the live session and in the first six months the video recording was viewed 2,100 times.

Dr. Miller presented on the major groups of macrofungi including several edible and poisonous mushrooms. Miller is a research professor and the Director of the Herbarium at the Illinois Natural History Survey at the University of Illinois Urbana-Champaign, and a native of Illinois.

“At the beginning, he asked the audience to take a poll, inquiring if people were listening to the webinar to learn more about gathering mushrooms for cooking, for education or for other reasons,” explained Christine Belless, Extension ag and natural resource program coordinator serving Fulton, Mason, Peoria, and Tazewell counties. “Twenty percent of listeners were interested in foraging for the pot; 64 percent just wanted to learn more about mushrooms. We were excited to have registrants from all over the state and even a small amount outside Illinois.”

Nicole Flowers-Kimmerle, Extension horticulture educator reported that a survey, sent to both webinar participants and available to video viewers, showed 14% were from the Fulton-Mason-Peoria-Tazewell Unit, 84% live in Illinois but outside the four-county unit, and 2% live outside Illinois. Of those, 64% were Extension Master Gardeners or Naturalists, 11% were associated with a nature preserve, 20% were members of the Illinois Forestry Association, Illinois Mycological Association, and 5% were listening as part of a university class.

“Since the webinar aired on May 7, 2020, we have received a couple of requests from other groups asking for permission to use the video for group presentations,” explained Belless. “Dr. Miller’s presentation was very well received and continues to educate many people.”

“The survey data showed a change in behavior in regards to respondents reporting they are more likely to forage for mushrooms in the future, as well as during the summer and fall,” noted Flowers-Kimmerle.  “Also, a significant increase in general knowledge and confidence in mushroom identification resulted from listening to the presentation.”

Dr. Miller’s presentation and response to audience questions gave participants a glimpse of his extensive expertise on both large macrofungi and small microfungi. He explained fungi is the second largest group of organisms on the planet, behind insects. There are an estimated 1.5 million fungi in the world, but only about 120,000 of these species are described. There are probably over 20,000 mushrooms in the USA and 2,000 in Illinois.

“We encourage everyone interested to enjoy his presentation online at go.illinois.edu/mushroomrecording,” concluded Belless.

Nicole Flowers-Kimmerle is a Agriculture and Natural Resources (Horticulture) Educator for Fulton, Mason, Peoria and Tazewell counties.  She completed a bachelors of science degree in crop science at the University of Illinois, and a master’s of science degree in agronomy with an emphasis in weed science at the University of Wisconsin-Madison.  She has also worked at Montana State University as a research associate where she worked on weed control in sugar beets and barley.  She taught high school chemistry and other science classes where she was able to teach students in both the school garden and greenhouse.  She works with both the Extension Master Gardeners and Extension Master Naturalists.