The 2020 Perennial Plant of the Year with Martha Smith 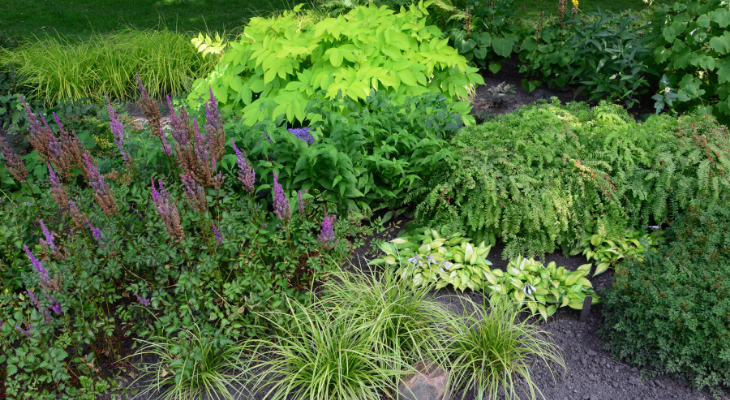 Native to shady forested areas in Japan, ‘Sun King’ was “discovered" by plantsman Barry Yinger in a Japanese garden center (atop a department store). This perennial has become a beloved shade garden staple across the country. Bright yellow shoots emerge in spring, then grow upwards to 4-6' tall and nearly as wide. The small, cream-colored umbels of flowers appear in late July – September, attractive to bees and are followed by tiny dark (inedible) berries. Despite the Sun King’s stature, it's very well behaved – little to no reseeding or suckering.

Place ‘Sun King’ where you want height. It is fast growing, filling a background space all season long. Hardy to USDA zones 3-9 (Northern Minn. to Gulf of Mexico) it’s hard to not find a place in the garden for this gold leaf beauty. To retain this color place in part shade – if in heavy shade the color becomes more lime green. Will tolerate more sun as long as ample moisture is provided. During long periods of drought ‘Sun King’ will suffer if not kept watered. Being herbaceous it will die back in the fall and re-emerge in the spring. Best grown in well-drained soils and benefits from compost being incorporated. No serious insect or disease problems and deer don’t bother it!

Also called Udo, Japanese asparagus, Mountain asparagus or Japanese spikenard, young shoots of this plant are considered a culinary delicacy in Japan where they are cultivated in underground tunnels. The flavor is reported to taste “asparagus-like” or “lemony”. Young shoots are harvested and blanched or pickled. White fleshy roots are eaten as one would consume a parsnip.

Terrific in combination with hosta, ferns, and past PPOY stars such as Heuchera ‘Palace Purple’ (1991), Brunnnera acrophylla ‘Jack Frost’ (2012) and Polygonatum odoratum ‘Variegatum’ (2013). A knockout when placed near Acer palmatum ‘Bloodgood’ or other maroon-leaf plants. And don’t forget containers – ‘Sun King’ is bold and beautiful in a big pot!

This low maintenance perennial benefits from a pinching or slight cutback in May to encourage branching. It truly meets the criteria set by the PPA to be awarded the Perennial Plant of the Year. The Perennial Plant of the Year® (PPOY) program began in 1990 to showcase a perennial that is a standout among its competitors. Perennials chosen are suitable for a wide range of growing climates, require low maintenance, have multiple-season interest, and are relatively pest/disease-free.