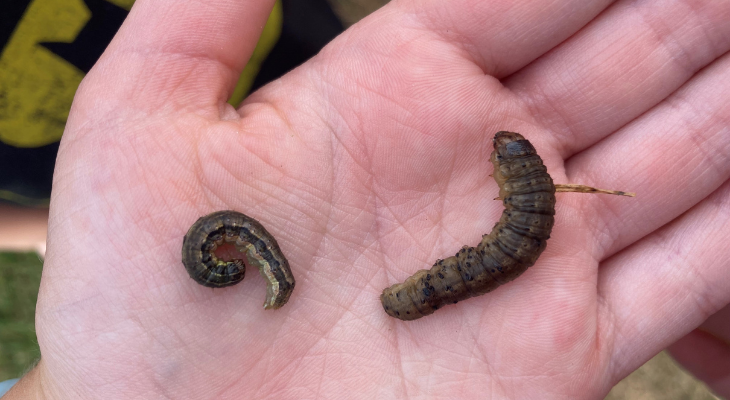 The larvae of a moth may be wreaking havoc on your lawns right now and could be exacerbated by the lack of rain leaving behind lots of dead grass in its wake. Recent sightings of large fall armyworm infestations of turf have been reported in Bloomington Normal this week.

Fall armyworm (Spodoptera frugiperda) caterpillars are normally a pest for farmers of alfalfa, some soybeans, corn, and small grains and are managed by pesticides and cultural practices. They are more prevalent in the southern states. Adult armyworm moths migrate north to Illinois from southern states to mate and lay eggs on the bottom of grass blades and other plants.

This year they are appearing earlier and in higher numbers than typical states Nick Seiter, Research Assistant Professor, Field Crop Entomology Department of Crop Sciences with the University of Illinois, who is showing concern over late soybeans.  Entomologists are reporting high numbers and lots of damage in the southern states in August most likely due to wet and cool growing conditions.

Unfortunately for homeowners, lawns and some ornamentals are included on this caterpillar’s menu. Damage may occur fast as large populations build and spread. Homeowners closest to pastures may see their lawns turn brown at a rapid pace.

A resident of the tropics, the moths migrate to the United States to lay their eggs. Caterpillars feed on the leaves of your grass blades and are most prevalent during the early morning or night. Caterpillars are dark-colored with an indistinct light line down the back and a yellow to white stripe on each side. They can be further identified by the light-colored inverted Y-marking on the head.

A quick drench of dead grass spots in your lawn with soap and water will force them to the surface. The armyworms will wiggle their way to the top within a few seconds. They will appear in varying sizes of the six caterpillar instars in seconds ranging from 1/16 of an inch to an inch. Add one tablespoon of liquid dish soap to one gallon of water and pour over one square foot of grass. Two to three or more caterpillars per square foot are enough to cause damage.

Strong turfgrass can endure low to moderate infestations if properly irrigated and fertilized.

Severe cases may need to be treated with insecticides to control the caterpillars and water (through additional irrigation) to force the regrowth of the damaged lawn. Severe infections followed by late summer drought may kill or diminish the quality of turfgrass. Fall armyworm larvae are controlled by the same insecticides used to control sod webworms.

ABOUT THE AUTHOR: Kelly Allsup is a Horticulture Educator for University of Illinois Extension serving Livingston, McLean and Woodford Counties. She meets the educational needs of her community, including local chapters of Master Gardener and Master Naturalist volunteers, through expertise in home horticulture and entomology. Her passion for ecologically-friendly gardening and all things plants makes her a dynamic speaker on topics that range from beneficial insects, growing vegetables and fruits, to urban trees.