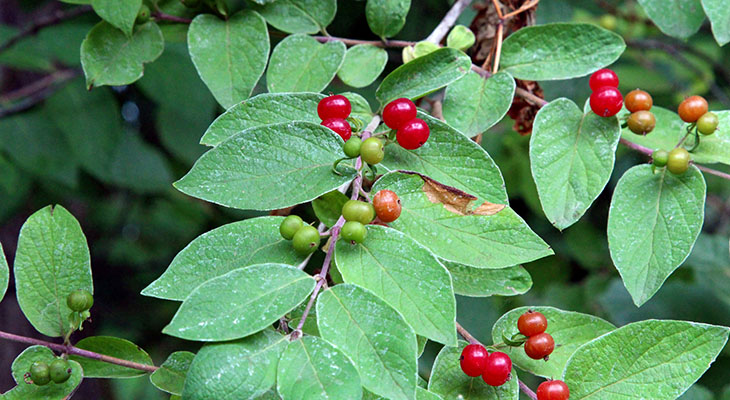 This time of fall, most of our native, deciduous vegetation is turning beautiful autumn colors and nearing the annual leaf drop that occurs before winter.  In the next few weeks all of our native vegetation will drop the leaves that have worked so hard to produce energy all year.  However, one non-native bush will retain its green leaves for weeks longer, gaining a competitive advantage over our native vegetation as it claims the last days of photosynthesis this season.

Bush honeysuckle, a common plant name that refers collectively to four very similar species of non-native bushes in Illinois, keeps its bright green leaves for several weeks longer than our native vegetation.  It also leafs out several weeks early in the spring.  This hardy, shade-tolerant bush thrives in Illinois.  It tolerates a wide variety of soil conditions, habitats and light regimes, including 100% shade, which makes it a tough competitor for our native vegetation.  In natural areas, especially forested natural areas, this bush is one of the biggest threats to Illinois native plant diversity.

Under mature forest canopy cover, few native species can compete with bush honeysuckle.   It readily grows in the shadiest understory environment and is a prolific berry producer.   Birds and other animals consume the berries after native sources of forage are exhausted for the year.  Although honeysuckle berries are not the top choice for our native fauna, the relative abundance in a sparse time of year promotes consumption since the berries persist into winter.  Upon ingestion, the fleshy portion of the berry is digested, and the seed is passed.  As animals that consumed the berries forage wide and far for food sources, the seeds are dropped over a widespread area through defecation, promoting the spread of this invasive species.

The species referred to as bush honeysuckle were introduced in the US from as early as 1752 to the late 1800s.  As early as the 1920s, archives at the Morton Arboretum, near Chicago reported spread beyond initial planting areas. Sometime between the 20s and the 50s, bush honeysuckle became naturalized in Illinois, meaning that this non-native bush had spread to natural areas and its reproduction was sufficient to maintain or expand its population.  Today, this exotic invasive species is present in every county in Illinois.  It is a fierce competitor in natural areas and also thrives in urban environments where it can find an unmowed or undisturbed spot to establish.

Control of bush honeysuckle has proved to be quite challenging in large natural areas due to the time and labor inputs needed for successful treatment and the rapid spread of this invasive.  Since it is a relatively shallow-rooted bush, smaller bushes, under 2 ft, can actually be pulled out of the ground by hand.  Larger bushes require a foliar herbicide spray or may be cut off near ground level with a herbicide applied to the cut stump.  Although these treatments are quite effective, they are difficult, if not impossible, to apply at the scale needed to eradicate bush honeysuckle from Illinois ecosystems.

In the words of Aldo Leopold, “One of the penalties of an ecological education is that one lives alone in a world of wounds”.  For me, this profound statement from one of the foremost conservationists in US history often comes to mind this time of year as one of the major wounds to Illinois native plant communities is highly visible in the form of green honeysuckle leaves.

Since I have learned to identify bush honeysuckle and learned of its impact, late fall and early spring can be a depressing time to go for a hike in the woods or a drive through forested areas.  Bush honeysuckle seems to be everywhere!  Most folks live in relative naivety to the impacts of this widespread invasive.  This paradigm does bring a sense of “living alone” to ecologists like myself that understand the impacts.

Please take time this fall season to expand your ecological education and learn about this exotic, invasive plant.  It may be surprising how close to home this invasive is in your neighborhood.  You can contribute to efforts to stop the spread of this invasive by controlling it in your yard or forested property.