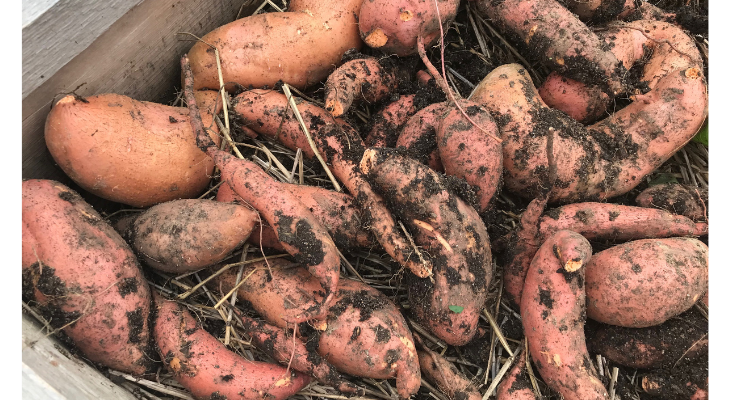 So many foods are epitomized by their annual appearance in Thanksgiving feasts, with sweet potato often right alongside the turkey and stuffing. This plant also has an interesting world history as both a food-security and subsistence crop in developing countries as week as a delicacy if Thanksgiving Feasts in other parts of the world.

Sweet potatoes (Ipomoea batatas) are in the botanical family Covolvulaceae, with other plants like bindweed and morning glory. The earliest known evidence of sweet potato dates to 8080 B.C., where it was found in archeological sites in Peru. It has long been domesticated, originating in South or Central America, with the precise antiquity of wild sweet potatoes is unknown but assumed to be somewhere between the Yucatan Peninsula in Mexico and Venezuela.

Research suggests there were two separate domestications that occurred in Caribbean America and the Peru-Ecuador region of South America leading to eventual distribution across the continent. In prehistoric times, it was distributed to the Pacific Islands, where it has remained an important crop throughout recorded history. Polynesian voyagers visiting the western coast of South Africa were likely responsible for bringing sweet potato back to the Pacific Islands region sometime around 1000 or 1100 A.D. It was fairly rapidly distributed to populated islands such as Hawaii, Easter Island and some other islands of eastern Polynesia, reaching New Zealand by about 1150-1250.

Columbus brought the sweet potato back from the New World in 1492, launching its debut in Europe and subsequent spread to Asia and Africa by the 16th century. This globalization actually lead to reintroductions into the Pacific Islands, bringing new genetics around this time.

Today, sweet potato is the seventh most important global agricultural crop. Amazingly, it produces more biomass and nutrients per acre that any other food crop. It also has a wide range of adaptability, making production possible in marginal agricultural settings. This adaptability has made the sweet potato incredibly important for food security in developing countries. Globally, over 95 percent of sweet potato production occurs in developing countries, where is it grown for both leaves and tubers to be consumed by humans and livestock.

In Africa, most production is done on a small or subsistence level, making it a true “poor man’s crop.” The adaptability of sweet potato allows for reliable production in very marginal settings, making it incredibly important to many African populations. It is a much-needed source of Vitamin A in many areas of rural Africa, providing relief from ailments associates with low levels of this important nutrient.

Sweet potato is commonly associated with pork production as a major source of feed throughout much of Asia. China produces about 70 percent of the total world sweet potato production, and around 70 percent of China’s crop is used as animal feed, primarily for pigs. In Vietnam, the Philippines, India, Korea, Taiwan, Indonesia and Papua New Guinea, agricultural systems built around sweet potato and pig production play a very important role in the rural economy.

In developing countries, the sweet potato’s versatility has made it a globally important crop for famine relief. It has often been planted in relief efforts to stabilize food supplies following natural disasters given its high production per acre and relative adaptability to varying soils and climate. However, production levels per acre vary widely around the globe for a variety of factors.

One major limitation on yield lies in the variation in quality of propagation materials. Sweet potatoes are typically propagated from vines, tubers or slips (sprouts), and many farmers in developing countries use plants from their own fields to propagate year after year. This method allows for easy transmission of some common viruses that greatly limit production. Across China, average losses in production rates from viruses are estimated at over 20 percent. In contrast, countries that have systems in place to provide virus-tested planting materials have shown yields up to 7 times higher.

In more industrialized countries, the sweet potato is often grown in more intensive agricultural production systems as a high-value crop, marketed for its health benefits. It has a high nutrient content as well as properties that are anti-carcinogenic and prevent cardiovascular disease. For diabetics, it has been shown to help stabilize blood-sugar levels to lower insulin resistance, which will likely lead to higher future demand around the globe.

As you enjoy all the leftover Thanksgiving dishes this weekend, take some extra time to appreciate the sweet potatoes. These nutrient-packed tubers are healthy and delicious as well as a globally significant crop with a very long human history.