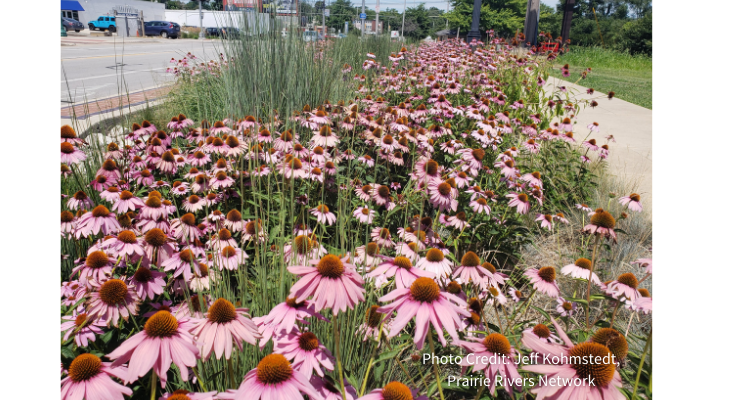 Amid all the pollinator conservation efforts in recent years, many gardeners have transitioned areas of lawn and other uses to vibrant pollinator gardens.  As homeowners search for new spaces to install pollinator habitat, many have questions about how and where to place these important oases of floral resources in the landscape.

One very common question that comes up relates to pollinator garden placement with respects to roads and traffic, with questions like, “Should I plant my pollinator garden in the front yard, or am I drawing in pollinators to be hit by passing cars?  Are butterflies and other insects able to dodge traffic or do they become road kill?”

Often times, gardeners want to use highly visible, front yard locations for their pollinator garden so passersby can enjoy the beautiful blooms and burgeoning wildlife attracted by these spaces.  However, there is concern for pollinator mortality as flying insects “commute” to and from garden spaces close to roadways.

There is ton of research available that assesses the impact of roads on wildlife populations.  However, most past research is focused on vertebrates, with relatively little work to date on invertebrates, like pollinators.  Much of the work is focused on highway plantings, as opposed to landscape type settings, but I believe there are some parallels or lessons to be learned from the research that is available.

One major takeaway from several studies is related to the speed adjacent traffic.  As you might expect, faster moving vehicles kill more insects than slower traffic.  So, gardeners should consider the relative speed of passing traffic when making landscaping decisions.  Slower moving traffic on less busy side streets presents less risk than fast moving vehicles on a busy thoroughfare.

Several studies did attempt to quantify the number of butterfly and moth species in given population that was killed by traffic.  This research looked at a variety of roadside settings and habitat types, concluding that mortality from collisions with passing vehicles impacts a relatively small proportion of local pollinator populations.  Mortality rates for butterflies near roads ranged from less than one percent to around 10% of the local population in the studies I reviewed.  One study concluded that death rates around 7% of the population was insignificant compared to natural factors.

However, insect mortality from vehicles does have a significant impact when considered at the larger scale.  A 2001 study conducted by researchers here at University of Illinois and others assessed mortality of moths and butterflies along central Illinois roads specifically.  This study examined roadways that represent a wide range of traffic conditions over a several week period in late summer.  The results from central Illinois were used to calculate statewide numbers for the same period of time.  The study estimated that over 20 million moths and butterflies were killed by traffic across Illinois in a single week.

Some research has attempted to correlate roadside habitat diversity with mortality rates from traffic by examining the diversity of plants near roads.  Results indicate that the type of plants we use can have a significant impact on the risk to pollinators.

One study in Iowa found that pollinator deaths from traffic was twice as high on roadsides with mowed grass, which is low-quality pollinator habitat given its low diversity of plant life.  Several studies have found that more diverse roadside habitat attracts a higher diversity of pollinators and presents significantly less risk of mortality from traffic than habitat with low plant diversity, like mowed grass.  So, the more plant diversity we add to roadside habitat, the less risk passing traffic poses to pollinators.

I generally recommend going forward with pollinator plantings even if roads are nearby, as long as plant height does not block views and impact safety (some municipalities have restrictions on plant height near roadways). Given the dire situation for many pollinator populations, we simply need more habitat to support their numbers, so every square foot counts.  To stack the odds in favor of our pollinating friends, select sites with slower moving traffic when possible and, above all else, use a diverse selection of native plants to provide the most beneficial habitat possible and reduce the risk of mortality from traffic.

McKenna et al. 2001. Mortality of lepidoptera along roadways in central Illinois. Journal of the Lepidopterists’ Society 55(2):63-68.

Munguira, M.L. and J.A. Thomas. 1992. Use of road verges by butterfly and burnet populations, and the effect of roads on adult dispersal and mortality. J Applied Ecology 29:316-329.