The Native Coralberry and an Unwanted Lookalike 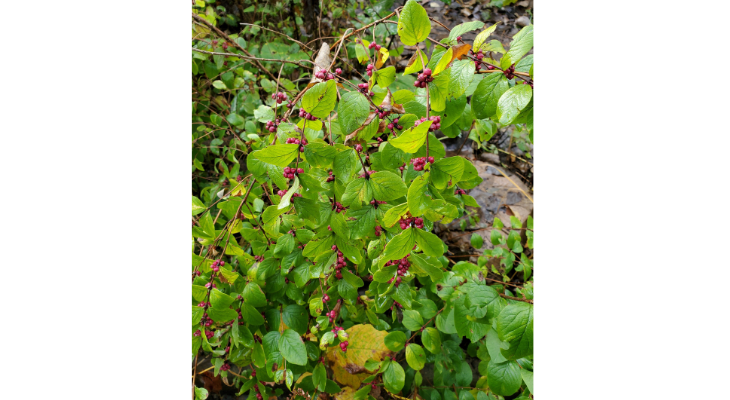 Every plant has its peak season of both ornamental and ecological interest.  With so many plants in full fall color right now, its hard to consider another ornamental attribute.  However, coralberry (Symphoricarpos orbiculatus) is a native shrub with a spectacular display of berries that mature in coincidence with fall colors each October.  Its coral-pink to almost purplish berries are an attractive ornamental aspect that provides winter forage for birds.

Coralberry is a smaller shrub, maturing to a mere 5 ft. but often much shorter.  However, it certainly loves to spread out, reaching a width much wider than it height that often approaches 8ft or more as a single specimen.  Beyond birds, this plant supports a host of mammals while being a favorite deer browse plants, which inspired its alternative common name of buckbrush.  Although inconspicuous, its spring flowers support a plethora of bees, wasps and flies with nectar and pollen.  It is also a known host plant for caterpillars of three native moths.

In nature, coralberry exists as an understory shrub known to form dense colonies, often dominating the forest floor vegetation on sites with its preferred conditions.  Its leaves and berries are surprisingly similar to another plant that tends to unwantedly dominate forest understories in Illinois, the notorious bush honeysuckle (Lonicera spp.).

Given its shade tolerance and uncanny ability to spread, bush honeysuckle remains one of the biggest threats to native plant diversity in forests across Illinois.  Its bright red berries mature in late fall and occur at an identical location on the stem as coralberry, in small clusters at leaf nodes.  Foliage on both plants is oppositely arranged with similarly-size, simple leaves that have a smooth, untoothed leaf edge.  So, it is no wonder that coralberry can be confused with the highly detrimental invasive, bush honeysuckle.

Where the plants differ is a finer line.  Although coralberry’s fruits are not nearly as red or juicy as bush honeysuckle, it can be difficult to discern without side by side comparison.  The primary difference in the two plants is their growth habit, with bush honeysuckle have a distinctive, arching branch form that coralberry does not.  Also, coralberry is typically a very short shrub, especially in heavily shaded woodlands.  However, it can be mistaken for younger bush honeysuckle plants that simply have not matured.  I find that coralberry has much thinner twigs, almost as thin as its leaf stalks, whereas bush honeysuckle has much wider stems that often get much thinker at maturity.  Coralberry never seems to get very much diameter, even on mature stems and even in well-established patches.

The best identification feature for both plants is based on phenology, or timing, of fall leaf drop.  In the coming weeks, as all our native, deciduous plants, like coralberry, drop their leaves, honeysuckle will retain green leaves for at least two weeks longer than everything else.  In late autumn woodlands, bush honeysuckle is unmistakable as its green leaves hang on while all else is bare.

Over the years, I have ran across quite a few instances where good-intentioned plant stewards have mistakenly removed coralberry thinking they were eradicating honeysuckle.  Given its typical niche in the forest and its propensity to form competitive, dense thickets, coralberry is actually a good replacement for bush honeysuckle.  It can compete with the continued pressure from new honeysuckle seedlings to hold its place in the forest.  Care should always taken to ensure a good stock of tree seedlings remain in the forest understory, but coralberry is a great plant to establish in forest edge habits and other areas that new honeysuckle plants tend to invade.

Coralberry as a Landscape Plant

In the home landscape, this native shrub works well in areas that it can persist as a colony.  I have seen it in spectacular form as an informal hedge, working well to define distinctly different spaces while its shorter stature allows for longer view into adjacent areas.  As mentioned above, it works wonderfully as a woodland edge species, or in other competitive situations with considerable plant pressure from other species.

Coralberry can handle a wide range of conditions from full sun to full shade and tolerates poor soils well.  So, it is also a great plant for problem areas where erosion or other disturbances have lowered site quality.

Find Coralberry in Our Area

If you are interested in seeing coralberry in nature, it is abundant in woodlands across central Illinois.  The included photograph was taken last week at the Urbana Park District’s Busey Woods Gateway Trail.  The boardwalked trail is accessible behind the Anita Purves Nature center and offers a wonderful view of a diverse, native woodland plant community.