Bee Balm for the Home Landscape 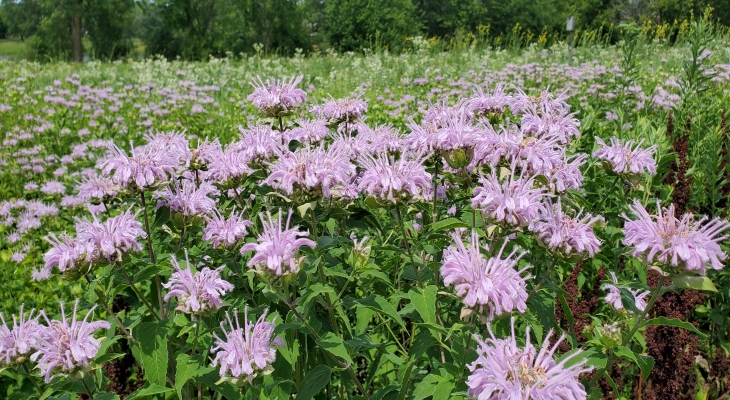 In recent visits to local prairies, I was reminded of a spectacular native plant that is often overshadowed by its more common hybrid cousins.  Wild bergamot (Monarda fistulosa) is native plant with a home range that spans our continent.  It frequents a wide range of locations on the landscape, such as prairies and woodland edges or abandoned pastures and road rights-of-way.  This tough plant thrives in bone dry, full sun or even more mesic and part shade locations, occupying all but the most wet and poorly drained sites.

Yet, in the home landscape, it is often overlooked for the more commonly available cultivars of its close relative, bee balm (Monarda didyma) or hybrids between the two species.

In any discussion of Monarda, it can be important to use Latin names as the genus as whole is frequently referred to as “bee balm”.  In total, there have been 17 native Monarda species identified in North America and the two mentioned herein have a long history as sought-after ornamental plants.  The first record of M. didyma in cultivation was noted as early as 1745 in New England, although this plant was valued by Native Americans long before for medicinal uses.

With tufted flowers that sport tube-like petals atop dangly stems, Monarda species look like something straight out of a Dr. Seuss book.  It’s this spectacular flowering display that makes these plants one of our showiest summer-blooming perennials.

Pollinators recognize Monarda as something special too, as these plants attract a wide range of insects as well as hummingbirds while in bloom.  The showy flowerheads form at stem tips as one flower structure that houses many individual flowers.

Nectaries are located at the base of long, tube-like petals which does limit nectar access for some pollinators with shorter tongues.  Nevertheless, as industrious insects typically do, there are some that have found ways around this obstacle.

Mason wasps and bumble bees have both been observed chewing holes through various petals to access nectaries on a variety of plant species.  In many of these cases, such as with Monarda flowers, smaller short-tongued pollinators, such as sweat bees and others have been shown to use access holes chewed by others to feed on nectar.  These interesting workarounds have often led some of these pollinators being referred to as "thieves" since they inadvertently have avoided contact with pollen bearing flower parts to access nectar through insect-made holes.

Problems in the garden

Although flowering displays may be spectacular, Monarda is not a compliant free group of plants when you ask most gardeners.  Being a mint family member, these species spread by rhizomes and may outcompete less vigorous neighboring plants.  In addition, powdery mildew is a common pathogen on most all Monarda species.  Although its rarely a plant health issue, it infects foliage to lower aesthetic value in late summer.

In recent decades, much of the breeding efforts among Monarda species have been focused on improved powdery mildew resistance.  Although there have been some cultivars of M. didyma released, the vast majority of new plants are hybrids between M. didyma and M. fistulosa.  Many of the new hybrids do exhibit good resistance to powdery mildew although not all live up to what may be expected.

Some of the newer cultivars have also been bred for shorter stature, which works nicely with the spreading Monarda habit to form a flowering ground cover.  Monarda ‘Balbalmurp’ (Balmy Purple) is one such dwarf variety that has done fairly well in my garden, exhibiting good powdery mildew resistance and really large flowerheads for such a short plant (<1 ft. tall).  It is a cultivar of M. didyma.

For more information on some of the newer cultivars and powdery mildew resistance, Mt Cuba Center conducted a 3 yr. trail beginning in 2014.  This excellent evaluation also covers the straight-species and compares pollinator use across the trial. Check out the results by clicking here.

However, there are some basic recommendations to manage powdery mildew which aren’t all that hard to apply. Since this fungal pathogen infects leaves and loves moisture, simply increasing air flow can help drastically.  Removal of infect foliage by cutting back after flowering can help reduce poor appearance, improve airflow and promote a new flush of uninfected leaves.  As with most all fungal foliage infectors, removing dead leaves on the ground and end of season cleanup of infected stems can help to reduce the infection source next year.

Monarda plants exposed to overly dry soils or drought can often be more susceptible to powdery mildew since stressed plants have lowered disease resistance.  So, maintaining proper soil moisture, either with supplemental watering or sufficient mulching, is another way to minimize the impact of this pathogen.

Who needs the hybrids anyway?

While newer hybrids may address powdery mildew issues there are always questions as to whether a hybrid plant will support pollinators as well as its native parents.  I’ve found that M. fistulosa does wonderfully when planted in a mixture of tall native grasses, asters and goldenrods.  The taller neighboring natives serve to hide powdery mildew damage in the late season and limit rambunctiously spreading Monarda.  In addition, this type of design is similar to native prairie settings where Monarda occurs naturally.  Perhaps mimicking our native plant community is a better overall solution than adding hybrid plants?