How to Get Rid of a Mouse in the House 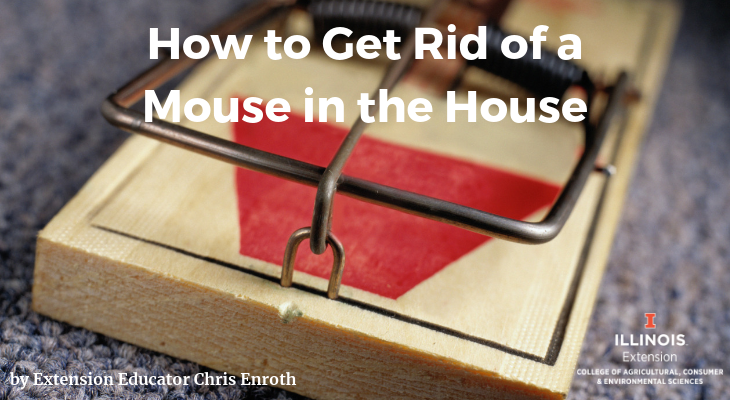 Is your house full of visitors that annoy you, eat your food, and can lead to great exasperation and hollering? In-laws and extended family members aside; what I mean are the mice that have decided to move into your home for the winter months. In the wild, these creatures would look for shelter to survive the winter, and your house is a lot cozier than that dead log in the woods.

It recently happened in my household. My wife was wiping down the counter when she moved the blender. "Chris!" she shouted, "I think we have a mouse."

Sure enough, as we inspected the counter along the wall, there were mouse droppings. I quickly went to the pantry to see what damage the mouse had caused. Thankfully, as I rooted around the shelves there was no evidence of a mouse. So at least it hadn't found the pantry goods, yet.

Despite that blizzard in early December, we've had a pretty mild winter, which means a lot of critters have remained active outside. However, with our most recent snow and cold weather, some homeowners may currently be under the invasion of mice.

In my house, I catch and release spiders and all manner of other insects, but mice in the home should be of concern. Vermin such as mice, and especially rats, are a natural source of fear in humans due to their disease-carrying potential and these pests should be controlled.

Following the discovery of our new kitchen tenant, I had to brief the dog and cat that if they wanted to earn their keep, their job was to catch the mouse. After hearing my inspiring speech, they promptly laid their heads back down and went to sleep. Apparently, catching this mouse was up to me.

My mouse control strategy starts in the garage, where I tend to encounter them more often. In the garage, I have a live trap, which is often used for catching voles outside as it can hold up to 15 mouse-sized rodents. Check live traps routinely so any captured rodents do not suffer from starvation or exposure. Captured mice can be released or euthanized. The humane method for euthanizing captured mice is CO2 asphyxiation or cervical dislocation.

Indoors, we opt for snap traps. I baited two snap traps with peanut butter, placed one under the range, where I found more mouse droppings, and the other in the pantry, in case Stewart Little found the rodent jackpot. Place your traps along walls and near openings, which is usually the path most mice take.

If you have trap-shy mice, try baiting an unset trap and let the mouse take the bait without repercussion. After that, bait and set the trap.

University of Illinois Extension does have recommended poison baits, but I really discourage homeowners from using these. Once the mouse consumes the poison bait they typically hide in walls, vents, or attics as symptoms set in, where they will eventually die. As decomposition begins, the odor will make any nearby rooms or even the entire house unlivable. If the poisoned vermin escape outside and is eaten by a hawk or neighborhood cat, the poison would then be ingested and could potentially be fatal to the predator. Use wire mesh or steel wool to seal any openings that are as big as the diameter of a pencil and don't forget common utility openings such as dryer vents or the A/C hose.

Keeping a clean house, caulking and sealing entry points, and moving piles of leaves or excess mulch away from a home's foundation is the best way to limit entry to all pests. And if you are wondering, yes we caught our mouse. No thanks to the dog and cat.

Good Growing Tip of the Week: If you have a mouse skilled at stealing bait from the trap without triggering it, use a small string and tie a piece of dried fruit, nut, chocolate candy, or bacon to the bait location. You may need a third hand so you don't get yourself snapped in the trap.