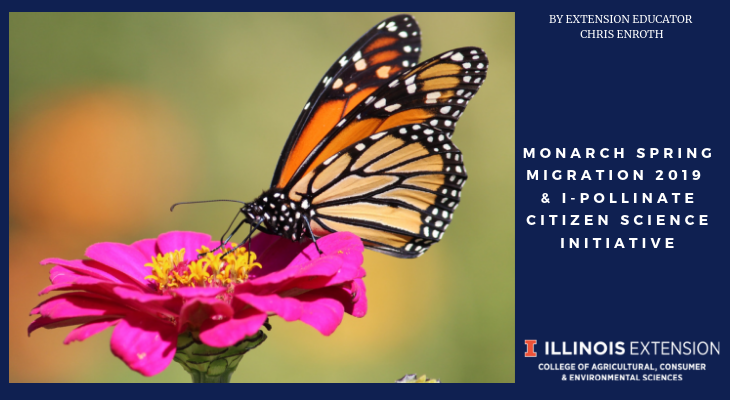 Spring is a herald of life. Grass flushes green, buds on trees swell with optimism, vegetables ready for planting in the garden emerge from basements crowded in flats. Spring also brings speculation. What will we encounter this growing season? What do the climatologists predict? Are all the Japanese beetles dead?

However, the news that I wait for every spring are updates on the status of the monarch butterfly. In year's past, the news and speculation have been dire, with a few rays of hope. So far this year, the news coming out of Mexico, where the monarchs overwinter, has been mostly good.

Where do I go for these updates? Dr. Chip Taylor, with Monarch Watch, a program out of the University of Kansas. Dr. Taylor runs a blog where he posts status updates from Journey North, a citizen science project aimed at reporting monarch butterfly sightings as they make their way from Mexico to Canada. You can go to journeynorth.org and report your first sightings of monarchs or milkweed, frogs, hummingbirds, and many more signs of spring.

In the fall, monarch butterflies migrate south to the Sierre Madre Mountains of Mexico. Here they roost on branches of oyamel fir trees, clustered together in colonies to keep warm. Tens of thousands of monarchs will cluster together on one tree. Once the weather begins to warm and spring returns, monarch butterflies begin their journey north back into the US and Canada.

This past season the population of monarchs increased from 6.1 acres to 14.9 acres of overwintering area. To put give these numbers some perspective the largest overwintering area was recorded was during the 1996-1997 winter at 44 acres, the lowest was during the 2013-2014 winter at 1.5 acres. Keep in mind scientists have only been monitoring these numbers since 1994.

This past winter, it is believed monarch butterflies did well, with normal mortality and disease rates. The potential is there that we may see higher than average returning butterflies. The major factor will be what happens in the southern states of Texas and Oklahoma. Timing is critical as the monarchs begin their journey north. As a cold snap or severe storm can decimate the migrating butterflies. For instance, in 2017, a strong front coming out of the southwest propelled the migrating butterflies farther north than normal. While one may think the butterflies appreciated the extra help, they arrived in our area before the milkweed had emerged. Without enough milkweed to lay their eggs, much of the first generation for our region was lost.

The good news is that some monarchs have already arrived in Texas, and they have been met with weather that is favorable to feeding, mating, egg laying, and caterpillar feeding. Our cool spring weather in the Midwest has restricted the migration of monarchs into our area, which is a good thing. Typically, we need daytime highs in the 70s to facilitate the northward progression of the spring migration. Therefore, monarchs are more likely to stay in the Southern US, laying their first generation. By the time this newest generation of monarchs reach us, milkweed should have emerged and put on enough growth to support them.

Dr. Chip Taylor says he is "cautiously optimistic" that monarchs will get off to a good start this season. His mentions a slight foreboding that our current weather conditions and the migration habits are similar to 2012, the same year we had a terrible drought and a decline in population.

Want to help scientists studying monarch butterflies and other pollinators? Join University of Illinois Extension as we launch I-Pollinate – a citizen science research initiative to collect statewide pollinator data. There is a live webinar on April 3 where scientists will present their projects and what data they need citizen scientists to collect. Register for the live webinar. Can't make it to the live session? That's okay. The webinar will also be recorded for later viewing.