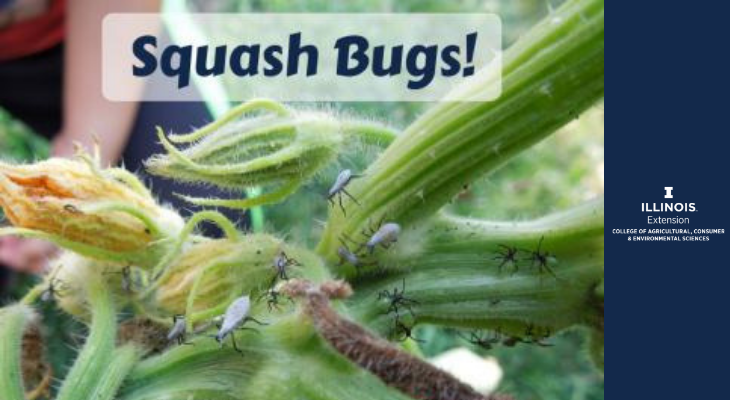 If you've ever grown squash or pumpkins (or other cucurbits, like cucumbers) then you've likely encountered squash bugs. Squash bug (Asasa tristis) adults are brownish-black and about 5/8 of an inch long. The adults will overwinter in protected areas (under plant debris, around buildings, etc.) and emerge in the spring. When they emerge they will seek out cucurbit plants to feed on as well as mate. Females will lay clusters of about 20 bronze colored eggs on the undersides of leaves, commonly where two veins meet to form a V, or on stems. The eggs will hatch about one to two weeks later, typically from mid-June to mid-July. Newly hatched nymphs have a black head and legs with light green bodies. As they grow, they will turn light gray and continue to darken as they age until they become adults. It takes them approximately five weeks for them to go from an egg to an adult.

These bugs have straw-like mouthparts (piercing-sucking) that they will stick into a plant and suck the sap out (like a juice box). Their feeding causes yellow spots to form on leaves. These leaves will eventually turn brown and die. In addition to damaging the leaves, their feeding can also disrupt the flow of water and nutrients to the leaves. Because of this, leaves will often wilt. Younger plants are much more vulnerable to feeding damage and can be killed if feeding is too extensive. While larger, vigorous plants can tolerate more feeding damage, runners can still be damaged or killed. They may also occasionally feed on the fruits of the plants, causing sunken dead areas (which can allow rot organisms to get in).

Since the bugs overwinter on plant debris, good sanitation in the garden is important. Make sure to remove plant debris in the fall, especially if you had issues with them during the growing season. The bugs may also hide out in mulch. If populations get high it may be a good idea to remove it to reduce the number of hiding spots they have.

It is important to get control of squash bugs early in the season. Not only because young plants are more prone to damage, but also because they are more difficult to kill the older they get. Fortunately, there are several ways to manage these bugs in your garden. First make sure you are growing healthy, vigorous plants by providing adequate water and fertility, healthy plants can tolerate more damage than sickly ones.

You can resort to the old stand-by of pest control – hand picking. Like Japanese beetles, you can simply knock them off plants or drop them into a bucket of soapy water. It's important to note that both the adults and nymphs are 'shy' and will quickly run for cover when they are disturbed, so you may have to do a little bit of hunting for them. If you encounter egg masses, you can crush them, or tear that part of the leaf off and destroy/dispose of it. You can also set up a trap for the bugs as well. Simply place boards, pieces of newspaper or cardboard out in the garden. The bugs will congregate under them at night. Then, come morning, you can come out and dispatch them however you see fit.

Insecticides can also be used to manage populations of squash bugs. Chemicals are most effective on young nymphs, the older and larger they get the less effective they are. If plants are blooming while you are using insecticides make sure to apply them when bee activity will be at a minimum, usually early in the morning or in the evening. As always make sure to read and follow all label directions.