My Mole Hills have Turned into Mountains 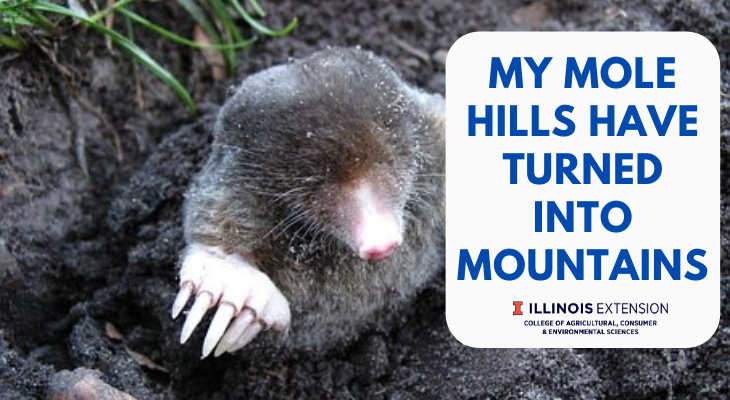 Now that we are spending more time outside, you might be noticing more and more mounds or ridges of soil popping up in your lawn. There are a few different animals that like to make these mounds, but often times the main culprit is the mole.

Moles are attracted to areas with a good supply of food which can also signify a healthy environment. By making your yard a less habitable area to moles or by using traps, it is possible to rid your yard of moles. Cultural methods of controlling moles includes using a roller to pack soil or reducing soil moisture (limit lawn irrigation, increase drainage, etc.) to make a less desirable habitat. Moles feed on insects, worms, and grubs, so it is suggested to remove the food source. Most insects and worms are beneficial to have around, so I would be hesitant to rid your lawn of them. Insecticides can be used to control grubs; however, keep in mind an insecticide will also kill beneficial insects.

Repellents such as Thiram or moth balls can also be used to deter moles; however, these are often thought to be ineffective. Toxic baits are another option for controlling moles, but again, if your lawn offers insects, grubs, and worms to feed on, the mole probably will not be attracted to feed on any baits used.

Most information available leads toward trapping being the best method to control moles. There are multiple options for trapping with the harpoon, scissor-jaw, and choker traps being the most commonly used. When placing traps, it is best to set the trap in a runway where fresh work is evident. Place the trap in a straight runway rather than a twisting surface ridge or mound. Often, traps come with instructions for best setting the trap, and it is wise to follow these instructions. If you have been unsuccessful after about 2 days, there’s a chance the mole has changed its habits and is no longer using that runway, the trap was set incorrectly, and the mole detected it, or the runway was too disturbed. A trapped mole always feels like a victory; however, ridding your lawn of one mole, opens it up to invasion from other moles.

Good Growing Tip: Before initiating your mole ridding endeavor, be sure that the mole is truly out of place. Moles can play an important role in soil and grub management in your lawn, and tunnels can also be viewed as soil aeration. Often when one mole is removed, there is another ready for a new home.