Sparks in the night: Fireflies and tips on conserving them 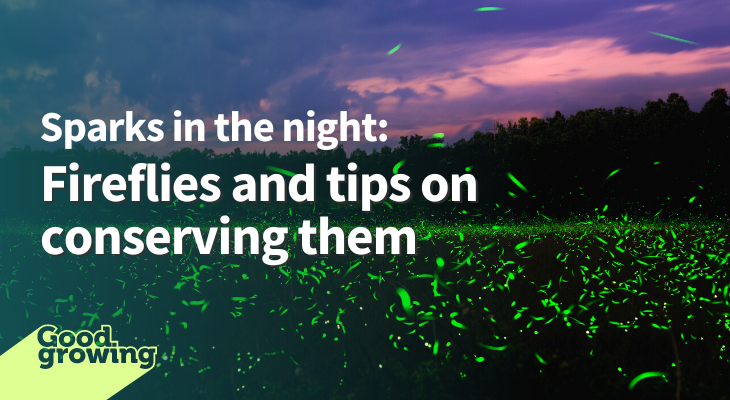 One of the most exciting times of the year is the first appearance of small flashing yellow lights in the evenings. The arrival of fireflies or lightning bugs, depending on where you’re from, is a sure sign that summer has arrived. Because of their magical displays, fireflies are one of the few insects that people don’t actively try to kill. However, in many places, people are noticing fewer of them than in the past. 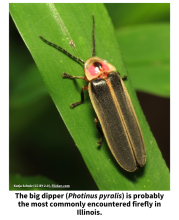 Despite their common name, these insects are neither flies nor bugs but rather beetles in the family Lampyridae, which means “shining fire.” There are over 2,000 species of fireflies worldwide, and more than 20 species can be found in Illinois.

In Illinois, the most commonly encountered firefly is probably the big dipper (Photinus pyralis). They can be found in various habitats like roadsides and woodlands and are most commonly found in open areas like yards and fields. This is likely the firefly you caught in your yard as a child. Adults typically begin emerging in early June (around 950 modified growing degree days) and will start flying around dusk. 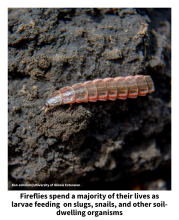 Fireflies spend most of their lives as larvae (two or more years in colder northern climates). Eggs are laid in the ground, leaf litter, and other moist places. After two to three weeks, the eggs will hatch. The larval fireflies are predators and will feed on worms, snails, slugs, caterpillars, and other small critters in the soil (free pest control!). Some will inject toxins into their prey with their mandibles, paralyzing it before eating.

Fireflies will overwinter as larvae, typically in the soil. Come spring, they will resume feeding before pupating. Eventually, adults will emerge and mate. Adults will live for a few weeks.

How and why do fireflies glow? 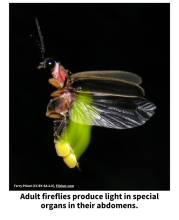 It is believed that larval fireflies first began producing light to warn predators they were toxic and distasteful. Eventually, adults of many species evolved to produce light to be able to attract mates. The flashing lights you see at night are the courtship displays of fireflies.

Male fireflies will fly and emit a flash pattern that is unique to each species. The females, which are typically on the ground, will flash back if she finds the male suitable. You can use the male flash pattern to identify firefly species. In the case of big dipper fireflies, the males will produce a relatively long (0.6-0.8 second) J-shaped flash (thus the big dipper name) every 5 to 7 seconds when the temperature is 72-78°F (they will flash more frequently when it is warmer and less when it is cooler).

The light fireflies produce is considered cold because very little heat is produced, over 90 percent efficient. In contrast, incandescent lightbulbs are only 10 percent efficient (90 percent of the energy used produces heat). **WARNING CHEMISTRY CONTENT** To produce light, an enzyme called luciferase combines with luciferin in the presence of magnesium ions, ATP, and oxygen. When all of these are mixed together, light is produced. If you want to take a deep dive into the chemistry of firefly bioluminescence, check out this website. **END CHEMISTRY CONTENT**.

There are a variety of threats that fireflies face. In a 2020 study, experts identified habitat degradation and loss, light pollution, and pesticide use as the main threats to fireflies (climate change and associated issues also ranked highly).

Like with many insects, the habitats that fireflies rely on have been shrinking for years. Firefly larvae need moist conditions like those found in wetlands and damp fields. In residential areas, removing leaf litter and other plant debris from yards reduces the amount of suitable habitat.

Most firefly species in the United States are crepuscular (active at dusk) or nocturnal (active at night). As our night skies get increasingly brighter, it is more difficult for fireflies to find mates. While it may not seem like our night skies are too bright, when was the last time you were able to see the Milky Way? Have you ever seen it? Nearly 80% of North Americans can no longer see the Milky Way.

Like other insects, pesticide use poses a threat to firefly populations. Remember, fireflies spend most of their lives as larvae that feed on pests like slugs, snails, and other soft-bodied critters. Pesticides that kill these are eliminating food sources for these insects. Pesticides applied to plants can also affect fireflies that use them as shelter or, in the case of herbicides, eliminate them altogether.

There are several things we can do in our landscapes to help firefly populations (if you’re trying to conserve pollinators, you’re probably doing a lot of this already):

Good Growing Fact of the Week: Have you ever caught a firefly and smelled something funny? Fireflies will release chemicals called lucibufagins when threatened. These bitter-tasting chemicals help protect them from predators.

References and for more information:

Fallon, C., S. Hoyle, S. Lewis, A. Owens, E. Lee-Mäder, S.H. Black, and S. Jepsen. Conserving the Jewels of the Night: Guidelines for Protecting Fireflies in the United States and Canada. Portland, OR: The Xerces Society for Invertebrate Conservation, 2019.