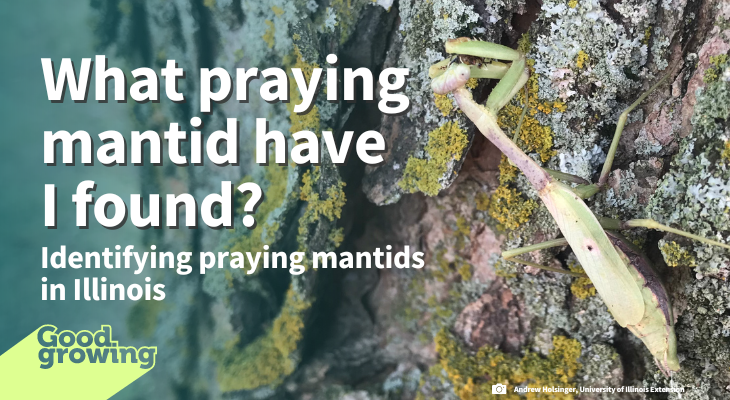 Most people are familiar with praying mantids. These large predatory insects are a common site in the fall, and we often encounter their egg cases (ootheca) this time of year too. But did you know that three different species of praying mantids, the native Carolina mantid and the introduced Chinese and European mantids, can be found in Illinois?

While praying mantids are a welcome sight to some, others are concerned about the presence of the non-native species.

Illinois has one native species of preying mantid, the Carolina mantid (Stagmomantis carolina), which can be found in the southern 2/3 of the state. These are the smallest mantids found in the state, with adults reaching about 2-2 ½ inches long when fully grown. Adults can range in color from gray to brown or green, and their coloration can be mottled or solid.

The oothecae of Carolina mantids are elongated, slender, and about 0.5-1 inch long. The outsides are tan, while the center is whiteish with dark brown stripes on either side. The tops of the oothecae are ribbed.

Chinese mantids (Tenodera sinensis) are the most commonly encountered praying mantid in Illinois. They were first noticed in the United States in 1897 in the Mount Airy neighborhood of Philadelphia. In the early 1900s, the oothecae were often gathered and distributed to nearby states to help manage pests. Today, the ootheca can still commonly be purchased from garden catalogs.

European mantises (Mantis religiosa) have also been in North America for over 100 years, being first found in Rochester, New York, in 1899. Like Chinese mantids, they were likely introduced on plant material. The oothecae were also widely gathered and distributed for use in pest management.

Like Chinese mantids, they can range in color from tan to green. However, they are smaller, getting to about three inches long as adults. European mantises have a spot on the underside of their front legs near their bodies, which is distinctive. The spot can be solid black or black with a white center. Their oothecae resemble Carolina mantids but are larger, around 1.5-2 inches long, and more uniform in color.

What should I do with the ootheca of non-native mantids?

Unless you want dozens of baby praying mantids running around your house, leave them outdoors. Praying mantids are commonly sold and promoted to gardeners to help control pests in their landscapes. However, mantids are generalist predators, meaning they will eat a wide variety of different prey. So, while you may release them to feed on those pesky caterpillars or squash bugs feeding on your plants, they are just as likely to eat butterflies or bees.

Because of their large indiscriminate appetite, some people are hesitant to leave oothecae in their landscapes when they encounter them, particularly those of the non-native Chinese and European mantids. While they are not native to North America, some research has shown that they don’t have much of a negative impact on insect populations, likely because they are generalist predators and don’t focus on one group of insects/prey.

So what is one to do? To some, the negative impact these non-native species may have on our native Carolina mantid populations and ecosystems is reason enough for them to gather up the oothecae and destroy them before the eggs can hatch. At the same time, others enjoy seeing them and will purchase oothecae and place them in their landscapes.