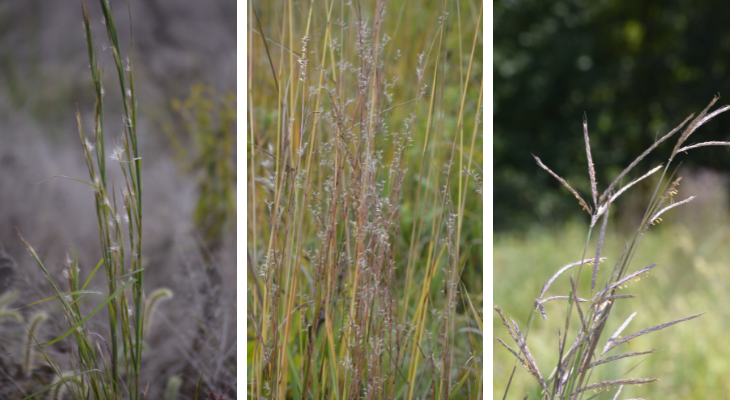 When you are at the plant nursery, have you ever noticed that plants often have two names listed on the tag? One is a common name, such as Switchgrass. The other is the scientific name, in Latin, Panicum virgatum. Why the two names? Is just knowing the common name okay?

Time for a quiz

Pictured above from left to right are Broomsedge, Little Bluestem, and Big Bluestem. If I asked you to choose which two you thought were most closely related, based on the pictures and names alone, what would be your choice?

You may think that because Little Bluestem and Big Bluestem have similar common names, they are closely related. You may also notice that Little Bluestem and Broomsedge look remarkably similar. But you may also wonder if Broomsedge is even a grass, or if it’s a sedge! (What’s a sedge? It’s a grass-like plant that often has a triangular stem, rather than round, and has different reproductive structures, among other differences).

Being aware of both the common and scientific name also plays a role when you are shopping for grasses or grass seed. Just this past weekend I was trying to find Kentucky Bluegrass seed to fill in some bare patches in my lawn, and I almost left with Kentucky 31 – but after taking a closer look, the label stated that Kentucky 31 is a variety of Tall Fescue (Festuca arundinacea), not Kentucky Bluegrass (Poa pratensis)! Clear as mud, right?

Have I made the case yet for learning scientific names? Even if you don’t pronounce them correctly (even revered scientists differ in their pronunciation!), learning to recognize them in writing is immensely helpful. Scientific names follow a naming system called binomial nomenclature, which is a two-word (usually) naming system. The first word refers to the genus the plant belongs to, while the second word is the specific epithet, and identifies the species. Put them together, capitalize the genus word, italicize the whole name, and you’ve got a scientific name!

While scientific names are in Latin, some are relatively easy to remember – brome grasses are in the Bromus genus, so the first word of their scientific name is Bromus. One group of grasses that produce panicle inflorescences make up the Panicum genus. Have you heard of the invasive grass Phragmites? In this case, the common name Phragmites is actually taken from the scientific name, Phragmites australis.

ABOUT THE AUTHOR: Erin Garrett is a Natural Resources, Environment, and Energy Educator for University of Illinois Extension serving Alexander, Johnson, Massac, Pulaski, and Union counties. Erin develops and delivers high impact programming to adults and youth to help them develop an appreciation for natural resources and to empower them to make small changes to positively impact the environment. Erin’s programming focuses on why homeowners should consider choosing native plants, how to support native pollinators, how to identify grasses, how to identify and manage invasive species, and developing an appreciation for prairie ecosystems.

ABOUT THE BLOG: Grasses at a Glance dives into grass identification, focusing on tips and tricks that make grass identification possible. Get information about native and non-native species, how to tell look-alikes apart, and which grasses you can find in Illinois. Never miss a new post! Sign up for our email list.

Grasses at a Glance