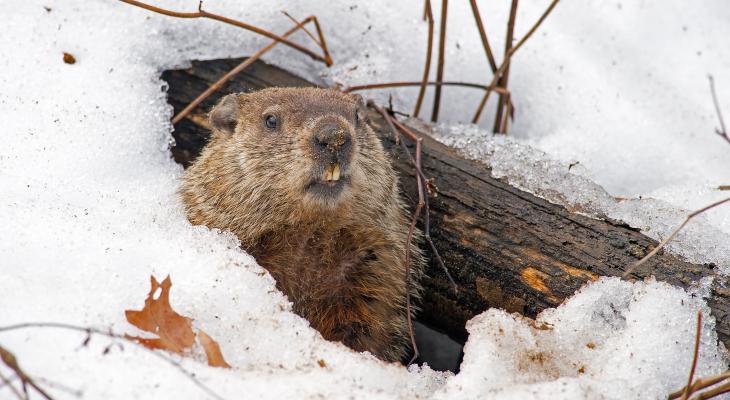 Have you heard about the celebration of the whistle pig? Maybe its more common name, Groundhog Day, rings a bell.

Every year, Punxsutawney Phil’s appearance on February 2 is a reminder we are halfway through winter and – shadow or no shadow – spring is on its way.

Groundhogs are Illinois’ largest squirrel and one of our few hibernating species. Groundhogs also go by many names – woodchucks or whistle pigs, for their distinctive alarm sound, if you have traveled far enough south. My favorite is “dirt ham” and have dubbed a recently gifted groundhog statue “Hammy.”

As to the age-old question – “How much wood could a woodchuck chuck if a woodchuck could chuck wood?” With its stubby front legs, the question is truly moot.

In 1887, Pennsylvanian newspaper editor Clymer Freas turned an ancient German tradition into a new American holiday. Freas named February 2, the peak between the winter solstice and spring equinox, Groundhog Day after none other than a large rodent.

As legend has is, if the groundhog emerges from his burrow to a sunny day and sees his shadow it will send him scurrying back underground forecasting six more weeks of winter. If it’s cloudy and there’s no shadow, spring will arrive early. The 2021 event will be streamed live from Punxsutawney, Pennsylvania at Groundhog.org.

Groundhogs, Marmota monax, are found across much of eastern North America, ranging from Alabama to Alaska. In the world of Illinois wildlife, these rodents are the heavyweight of the Sciuridae family weighing in at up to 15 pounds and measuring as long as 2 feet. They are common in rural and suburban areas.

As you read this, groundhogs are in a deep hibernation. Their heart only beats a few times a minute and their metabolic rate is extremely reduced. Groundhogs prefer to hibernate in a forest where they can dig a single-entry burrow under the roots of trees for added protection from predators while they sleep.

As one of Illinois’ few true hibernators, the groundhog may be underground for as many as four months depending on where they live. Except for extreme weight loss they tend to emerge unharmed in February. These short-legged nibblers then move into more open areas to live closer to food sources and will dig new more elaborate burrows leaving their winter bed behind.

As their name implies, this animal spends a lot of time on or in the ground. But groundhogs will also defy their moniker and shimmy up a tree to escape predators or to reach their all-time favorite snack – apples. Groundhogs are solitary animals whose preferred menu includes sweet grasses, flowers, and as many gardeners know, homegrown vegetables.

It is not hard to miss a groundhog burrow with its large round hole and huge mound of excavated dirt. In their summer burrows, they dig plunge holes for escaping danger. These are dug from the inside so there is no mound of dirt like the entrance hole. Plunge holes can be detrimental to livestock who can step into one and injure a leg.

Groundhogs only share a burrow long enough to mate and then move to their respective homes where the female will raise her litter by herself.

As we have built more places for people and reduced fence rows in agricultural areas, groundhog habitat has changed. So, groundhogs are adapting, like many other wild animals, to urban areas. Naturally, they still seek food and structures to burrow under.

This of course can create chaos for homeowners when they dig multiple holes under sheds, barns or in a front yard or invade a garden. To coexist with a new groundhog neighbor, make it difficult for them to dig by adding barriers such as fencing or rocks.

If you need to remove the animal, trapping is the suggested method and you must get a permit from the Illinois Department of Natural Resources or call a nuisance wildlife control operator. Visit the Illinois wildlife website for more information.