Ode to the Opossum 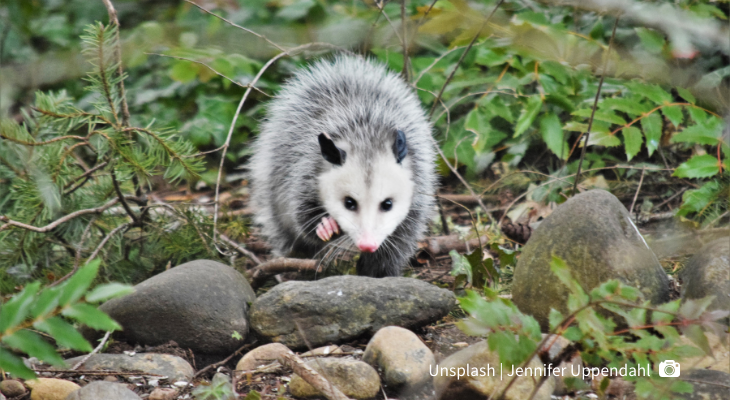 Vacuous dark eyes, scaly rat tail, 50 pointy teeth, and oh, that hiss! What is not to love about the opossum?

North America’s only native marsupial gets little respect and often scares homeowners who stumble upon this nocturnal visitor snacking below the birdfeeder, rummaging through unsealed garbage cans, or pacing in the window well waiting to be set free. But opossums are really misunderstood nature warriors. And tell me, what other animal has a footprint that is a star?

With that long furless pointy tail, opossums are often mistaken as members of the rodent family. But Virginia Opossums (Didelphus virginiana) are members of the marsupial family Didelphidae.  Adults weigh between six and 15 pounds and are 24 to 33 inches in length including the tail. Males are larger than females and their size is often compared to an average house cat.

Opossums are covered in white rough fur with grey to black tips. They have a thick undercoat and white guard hair. Guard hair function is fourfold: thermoregulation, waterproofing, camouflage, and sensory perception. The ears and tails of opossums are hairless and often subject to frostbites since opossums do not hibernate and are active in winter. Opossums don’t build their own dens but find convenient homes in piles of woody vegetation, old abandoned animal holes, and tree cavities, or near human activity — under decks, sheds and slabs.

Females become reproductive in their first year and generally have two litters, one in winter and one in spring with an occasional third litter. Litters average from eight to 10 young but can be as large as 20. Gestation is an amazingly short 13 days. Young are born not fully developed, no larger than a dime, and are called joeys like their distant more well-known relative, the kangaroo.

It’s all in the bag…what is that pouch all about?

From the birth canal, the hairless newborns which are barely beyond fetuses, ‘swim’ through their mother’s thick fur to the pouch following a wet path created by the mom licking her fur. The pouch has 12 teats; 11 arranged in a circle with one in the middle, not all of which are functional especially in young females, so mortality can be with large litters. Once in the pouch, the newborns latch on to a teat which swells in their mouth to keep them attached for eight to 10 weeks.

As the young opossums outgrow the pouch, they climb onto their mother’s backs grasping her fur for a ride along. As she brings the family with her to find food, the young begin to learn survival skills. Opossums are solitary animals, except when females are raising their young, and by three to four months old disperse on their own. Opossum life span is two years; they are preyed on by foxes, dogs, snakes, coyotes, raccoons, and bobcats — and of course, vehicles.

Humans are often tricked as well and will put the poor “dead” opossum in the nearest garbage can only to be surprised by a resurrected opossum staring at them waiting to get out and return to normal opossum business as usual now that the danger has passed.

Possum Tales about their Tails

Although in storybooks, opossums are often depicted sleeping, hanging upside down hanging on a tree by their tails, in reality, they can only hang by their tails for a short time. Nor is it true that opossum’s young, hang off their tails. They do use the prehensile tail to help them climb trees and carry nesting materials.

Opossums are mesopredators. They are the omnivore poster child. They eat nuts, berries, insects, small mammals, birds, and carrion in the natural setting, and they aid in seed dispersal. In the urban setting, opossums are true garbage eaters feasting especially on pet and bird foods outside.

The next time you run across someone that thinks opossums are of no value, you might want to share this amazing fact. According to the Wildlife Medical Clinic of Illinois at the University of Illinois, the Virginia opossum kills nearly 95% of ticks that they encounter. It is estimated that a single opossum can eat 5,000 ticks each season (2019). And given the increasing incidence of tick-borne diseases, I see the Virginia Opossum as a nature superhero!

As if that weren’t enough to be positive about our possums, opossums do not contract rabies because their extremely low body temperature, 94°F to 97°F, is not high enough to support the virus.

So, the next time you are out on a muddy or snowy day, look down to see the stars, opossum tracks, the footprint of a real nature superstar.

MEET THE AUTHOR
Nancy Kuhajda is the Agriculture and Natural Resources Program Coordinator for the Master Naturalist, Master Gardener and Master Composter Programs in Will and Grundy Counties in Northeastern Illinois. Nancy has a bachelor's degree from the University of Illinois at Urbana Champaign and has Graduate Certificates in Crop Science and Horticulture. Nancy also writes a weekly column for a local Joliet paper on nature and gardening topics. Nancy's passion is to bring understanding of the natural world to the community at large but particularly to the underserved urban youth, special needs, and elderly in congregate housing in the community.

ABOUT THE BLOG
Naturalist News is a blog by University of Illinois Extension Master Naturalist staff and volunteers who bring you stories highlighting the individuals, places, wildlife, and plants that make this state amazing. Join us each week to learn something new, be inspired, and become connected to your own community by recognizing the amazing ways we are all intertwined. Want to get notified when new Naturalist News posts are available? SIGN UP HERE!