Pelicans make a pitstop in Illinois on spring migration 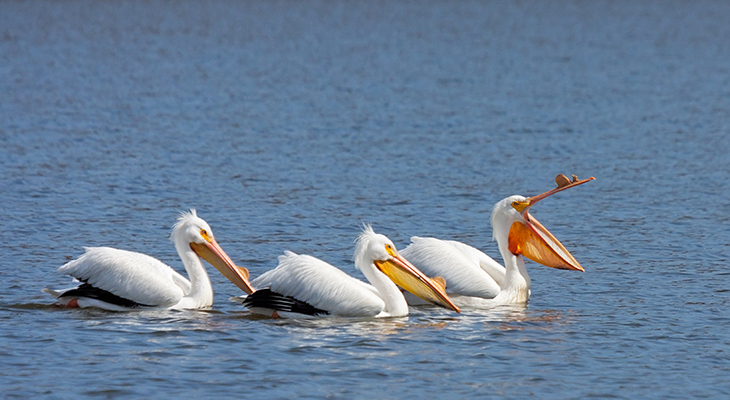 In the spring, a remarkable migratory bird returns to the waters of the Illinois River National Wildlife and Fish Refuge Complex which includes the Chautauqua National Wildlife Refuge. American white pelicans stop at the refuge to rest and refuel on the way to their summer breeding grounds in the north. While they’re here, they entertain birders and outdoor enthusiasts alike with their graceful flight, immense size, and impressive fishing skills.

The American white pelican is hard to miss. It stands about 4-feet tall, has a wingspan of approximately 9 feet, and can weigh up to 20 pounds. It is one of the largest North American birds. Adding to its conspicuous stature are its beautiful snow-white feathers, long neck, flat orange bill with expandable throat pouch, short orange legs and large webbed feet.

In the air, pelicans fly on wide wings outlined by their signature black flight feathers. With their necks bent back over their bodies, they take advantage of thermal updrafts that help them stay aloft for long distances. Flying in precise lines, V-shaped groups or circling overhead, they glide silently – often by the hundreds.

On the water, they are strong swimmers and capable predators. Unlike their smaller cousins, the brown pelican, they do not dive plunge from the air to catch their fish. Instead, American white pelicans paddle in the water, sometimes tipping up like a duck, to scoop up fish. They often work cooperatively in groups to corral fish toward the shore. There the pelicans sweep them into their huge neck pouches, filter out the water – nearly 3 gallons – then swallow their prey.

Fishing enthusiasts who watch such tactics are misled if they believe that pelicans are their competitors. In fact, American white pelicans seldom prey on the same fish sought by people. Instead, pelicans prefer “rough” fish like bottom feeders and small schooling fish. They also dine on minnows, crayfish, crustaceans and amphibians.

Why do pelicans stop in Illinois?

Once rare in Illinois, pelicans have been visiting the Refuge Complex for only about two decades. Their presence is largely due to wetland restoration along their migratory route. The recent abundance of the invasive Asian carp has also attracted pelicans to follow this new food source.

At the Refuge Complex, pelicans find an ideal stopover. Here they enjoy an abundance of open water, plentiful food, and places where they can rest away from human development. Once refreshed, they leave to resume their trip to the breeding grounds.

When is the best time to see American White Pelicans?

If spring comes early, American white pelicans arrive at the Refuge Complex in mid-March; they are here in force by early April.

Enjoy them as they fly in silent soaring circles overhead, or watch them glide single file only a few feet above the water. On the water, try to catch their flat-footed water ski landings and their running take-offs. Or find them congregating in small groups near the shore where they forage and roost.

The pelicans stay at the Refuge Complex until May when they continue their migration to their breeding grounds in the northern Great Plains and Canada. On their way, both males and females grow their breeding plumage of ornamental head feathers and a bright orange plate on their upper bill. It will fall off when the mating season is over.

Once they arrive on the breeding grounds, courtship rituals commence and mating quickly follows. Together, the bonded pair builds a shallow nest on the bare ground and incubates two eggs from which only one chick usually survives. Flocks of American white pelicans return to the Refuge Complex again in September on the way to their winter grounds along the Gulf Coast and Mexico.

This article was originally published on the USFW Service website.

Carla Rich Montez is a University of Illinois Extension Master Naturalist in the program serving Fulton, Mason, Peoria, and Tazewell counties. Carla volunteers as an outdoor writer for the U. S. Fish and Wildlife Service, Illinois River National Wildlife and Fish Refuge Complex.