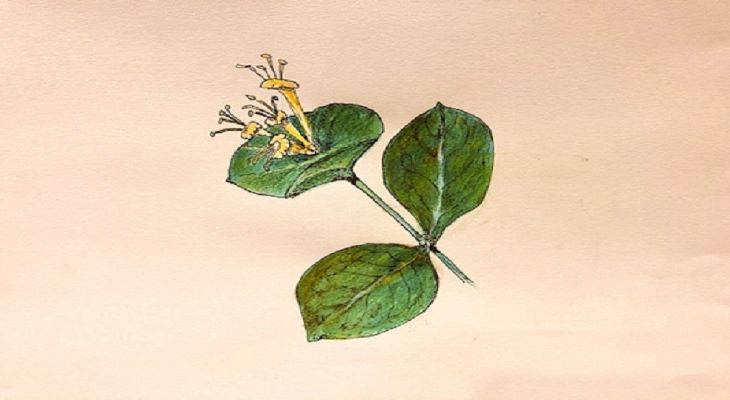 Usually, when the word “Honeysuckle” is mentioned among naturalists and gardeners, you get a look of pain. Yes, that word brings on an overwhelming feeling of exhaustion in me because I have to deal with the very invasive species of its kind on my property. Yet, in my garden, I grow a Honeysuckle!

Lonicera reticulata is native to Illinois and is commonly called the Grape or Yellow Honeysuckle. I came across this attractive plant many years ago while visiting a native plant nursery in Monee Illinois. This plant caught my attention right away when I drove in and saw it featured in one of their front display gardens. It was in full bloom at the time with hundreds of yellow blooms and a heavenly scent. It wasn't familiar to me right away as a Honeysuckle because its leaves were rounded and it took on two forms in their display. One as a climber on an arbor and another as a trimmed shrub. From the central part of its lily pad-shaped leaves emerges the trumpet shaped flowers. It can be said that this is a plant that cannot make up its mind about what it wants to be – vine or shrub. Indeed, I have it growing in both forms in my garden. The vine flowers better than the shrub probably because I trim the shrub regularly. If left to sprawl, like in the wild, it would flower more. As I understand it, this plant was once found in most of north and central Illinois but now with its invasive cousins taking over, wild populations are probably low. It is not an aggressive seeder and I have only been successful at establishing new plants from runners and cuttings.

In late May and early June the lovely trumpets flower and are a host to bees and hummingbirds. I particularly like that small birds and tree frogs occupy one plant that I have growing along my deck stairs in the backyard. The dense foliage is good cover for them.

Grape Honeysuckle is an interesting and enjoyable plant to grow and I look forward to enjoying its blooms at this time of the year.