Aphid pests on the move in backyard gardens, agricultural fields

URBANA, Ill. – Ever spy small, yellow dots on the back of plant leaves during the summer months? Those tiny pear-shaped specks are aphids.

Aphids are a common insect pest in the home landscape and for houseplants. There are many species of aphids in Illinois and they feed on a large range of host plants, says Sarah Hughson, University of Illinois Extension entomology specialist.

“They can produce many generations in a single year, so it’s good to keep an eye out throughout the growing season,” Hughson says. 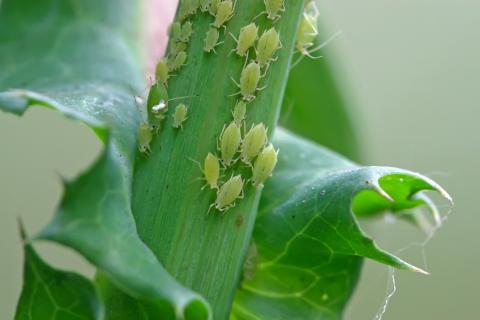 Aphids can be green, brown, yellow, with or without wings, and are identified by small structures called cornicles on their rear end.

Aphids suck fluids from stems and leaves while leaves are still expanding. This can lead to discoloration, leaf-curling, misshaped leaves, and stem distortion.

While landscape plants can tolerate aphids feeding on them, they cause more serious damage to annual fruit and vegetable crops by transmitting viral diseases, according to University of California’s division of Agriculture and Natural Resources.

Fortunately, there are many ways to deal with aphids.

Aphids can be removed by hand or sprayed with pressured water from a hose. Aphids thrive on nitrogen-rich plants, so reducing nitrogen fertilization can slow population growth.

Aphids also have many natural predators such as lady beetles, hoverflies, lacewings, and parasitic wasps. Introducing these insects as a biological control increases the predator population and can overwhelm the pests.

Ants and aphids sometimes must be dealt with at the same time. Some species of ants eat the sugary honeydew aphids produce and ants will sometimes “farm” aphids and defend them from predators. It is best to get rid of an ant population with insecticides before trying to control the aphids.

When using chemical controls, or insecticides, Hughson says to stick to oil products and insecticidal soaps to harm fewer non-target insects. Aphids are susceptible to many contact insecticides. They are also susceptible to system products such as Merit, but it is important to apply only after the plant has fully bloomed to avoid exposing pollinators to the chemicals. Always check the label on a pesticide. Different products should be used on ornamental and edible crop plants.

Learn more about aphids in the Home, Yard, and Garden Pest Newsletter, at hyg.ipm.illinois.edu.