URBANA, Ill. – Every year, come November billions of jack-o’-lanterns whose wilting faces are now past their prime need to find a new home. Tossing pumpkins in the trash bin is the simplest solution, but is not the best for the environment says Chris Enroth, University of Illinois Extension horticulture educator.

“In a landfill, pumpkins and other organic materials are buried and rot without oxygen, which creates the potent greenhouse gas methane,” Enroth says.

Instead, give gourds a second life by donating them to a zoo or wildlife rehab center or composting them, either personally or through a municipal drop-off program.

Several well-intentioned posts making the rounds on social media have suggested other options such as leaving pumpkins in fields, woods, or nature preserves to decompose or for wild animals to eat. But there’s more to it than a Tweet can explain.

Leaving pumpkins on private property or a nature preserve without permission is littering and illegal. Come fall, it is common for natural areas to become a dumping spot for yard waste, pumpkins, straw, and other organic decorations which is costly. The thought is that these items will compost, but Peggy Doty, Illinois Extension energy and environment stewardship educator, says it has a negative effect.

“Straw and pumpkins smother native plants and create odd little microhabitats that are not healthy and full of molds,” Doty says. “Pumpkins can now be found growing in preserves, probably from last year’s pumpkin drop off.”

Straw smothers plants and takes a long time to decompose and if it blows over roads, it is hazardous, and staff have to pick it up.

Leaving pumpkins for wild animals to eat can also create problems. If dropped off in ditches or near roadsides, animals will be drawn in close to traffic where they may get hit.

One social media post suggests that pumpkin seed acts as a natural dewormer, but Veterinarian Samantha J. Sander who is a Clinical Assistant Professor at University of Illinois says the research on this is mixed.

A compound in pumpkin seeds, cucurbitacin, is a dewormer, but different squash have varying levels and the dose and effectiveness is unknown. It also varies depending on the animal and the worm.

When it comes to livestock, cattle, hogs, horses, and poultry can all eat pumpkin smashed open or cut into chunks. Since pumpkins are not a routine part of their diet, this can cause digestive upset. 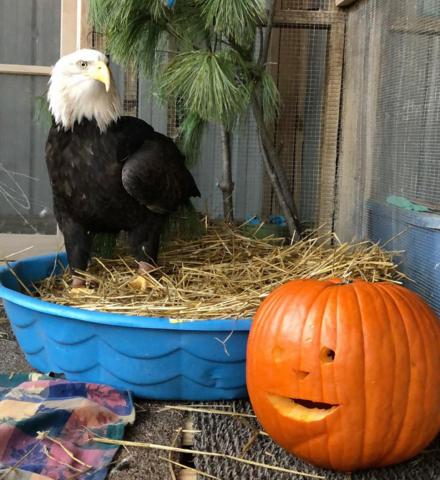 At home, dogs can safely eat pumpkin puree, but large, hard chunks can cause an obstruction. Cats benefit less from pumpkin, but it can be a good source of fiber.

Sander cautions that the biggest caveat with feeding any animals pumpkin is they have to be fresh.

“Moldy pumpkins or those with significant bacterial contamination can be dangerous,” Sander says. “Jack-o’-lanterns are particularly of concern for this, as they break down quickly. Whole pumpkins that have been sitting out in the sun on someone’s porch for weeks could also succumb to degradation and contamination.”

The Illinois Department of Natural Resources does not recommend feeding pumpkins to wildlife as it can lead to damage complaints as well as the spread of disease, such as Chronic Wasting Disease in deer. Except for bird and squirrel feeders near a residence, it is illegal to provide food, salt, mineral blocks, or other products for deer and other wildlife to eat. It is also dangerous. Every fall, the University of Illinois Wildlife Medical Clinic treats wild animals that get trapped or tangled in decorative items left on holiday decorations.

If a pumpkin is starting to decompose, the next best option is to turn it into compost. Chop up gourds to help speed up the process before tossing the pieces into a compost pile.

Many municipalities have composting facilities where residents can drop off pumpkins and other organic materials. A list of compost facilities is available on the Illinois EPA website at www2.illinois.gov/epa.

In Cook County, 37% of landfill material is food waste, a major source of the greenhouse gas methane. To divert pumpkins from landfills, Illinois Extension in Cook County is hosting several pumpkin smash community events on November 6 in the Chicago area. Residents are encouraged to “don’t trash it, smash it!” by catapulting their pumpkins into a dumpster which is then transported to a composting facility.