Getting to know Illinois' largest hibernator this Groundhog Day 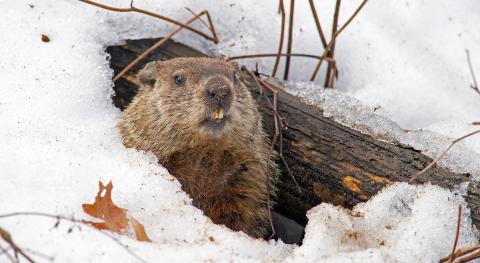 URBANA, Ill. – Every year, Punxsutawney Phil’s appearance on Feb. 2 is a reminder we are halfway through winter and shadow or no shadow spring is on its way.

Groundhogs, Marmota monax, are Illinois’ largest squirrel and one of the state’s few hibernating species. Ranging from Alabama to Alaska, groundhogs are common in rural areas and in recent years found more frequently in suburbs and cities.

“A rodent with many names, groundhogs are also known as woodchucks or, if you have traveled far enough south, whistle pigs for their alarming call,” says Peggy Doty, University of Illinois Extension energy and environmental stewardship educator. “I’ve also heard them called dirt hams.”

Groundhogs are the heavyweight of the Sciuridae family weighing in at up to 15 pounds and measuring as long as 2 feet. As the name implies, this animal spends a lot of time on or in the ground, but groundhogs will also shimmy up a tree to escape predators or to reach their favorite snack: apples.

In the winter, they dig large burrows under trees for extra protection.

“Right now, groundhogs are in a deep hibernation with their heart beating only a few times a minute,” Doty says. “We can expect to see groundhogs emerging in February after up to four months underground.”

These solitary critters will then start to move into more open areas closer to food sources such as sweet grasses and flowers and to dig their summer burrows. These large tunnels can be detrimental to livestock who can step in an entry hole and injure a leg.

Groundhogs, like many other wildlife, have adapted to urban settings as human development pushes into existing habitat and agricultural fence rows decrease. Every spring, Doty gets calls and emails from worried homeowners.

“As they move out of the forest edge, groundhogs end up in roadsides, pastures, backyards, and under sheds,” she says. “This of course can create chaos when they dig under structures or invade a garden.”

To coexist with a new groundhog neighbor, Doty suggests adding barriers, such as fencing or rocks to try to make it difficult for them to dig.

If a groundhog becomes a nuisance and needs to be removed, trapping is the suggested method. To do this, call a licensed nuisance wildlife control operator or get a permit from the Illinois Department of Natural Resources. Visit the Illinois wildlife website at www.wildlifeillinois.org for more information.

As to the age-old question – “How much wood could a woodchuck chuck if a woodchuck could chuck wood?” With its stubby front legs, the question is truly moot.