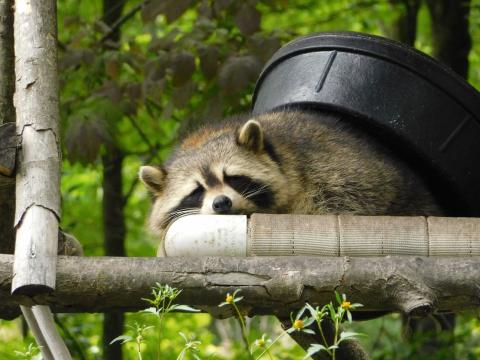 While they may not thrive in the heat, Illinois native wildlife and vegetation are well adapted to survive the region’s extremes.

“When we hit temperatures outside the average range, a lot of our wildlife change when they’re most active,” says Peggy Doty, University of Illinois Extension educator in energy and environmental stewardship.

During the hottest part of the day, animals seek shade. They’ll come out at dawn and dusk to eat, so drivers should be aware they may see more animals along roadsides at this time.

Hot temperatures can even initiate a summer hibernation in both plants and animals. It’s not uncommon to see squirrels dozing on a tree branch with their legs dangling over the sides.

“That’s the most natural first response; some animals slow their body down and do a mid-summer hibernation called estivation,” Doty says. “If they’re not active, they’re not losing liquid and they’re saving energy.”

Plants and trees stop the normal process of transpiration, which releases water vapor.

Prairie plants use their deep roots, some as long as 15 feet, to tap into underground water sources. The sandstone bluffs of Southern Illinois are home to the unique "resurrection fern," pleopeltis polypodioides. “It will completely dry up and look dead as a doornail,” Evans says. “Then, when water comes back, it greens right back up.”

Trees also rely on their extensive root system to stay hydrated, but ongoing heat will raise soil temperatures killing small, fine roots. Evans says the heatwave in the summer of 2012 did a lot of damage to trees in Southern Illinois.

“We saw a lot of tree mortality that I attribute to root damage,” he says. “If they have root damage, it takes five to seven years for that tree to succumb.”

Wilting leaves are the first sign of heat stress. Homeowners should water deeply under the entire canopy of the tree to prevent long-term damage. University of Maryland Extension recommends wetting the soil at least 6-inches deep, which requires 65 to 130 gallons of water for 100-square feet.

As summer progresses and creeks and ponds dry up, animals will test out new water sources.

“If you have birdbaths, fountains, or ponds, you’re going to have visitors,” Doty says. “It’s good to check pools for young animals in the morning because they will drown seeking water.”

She also recommends putting the removable tops of ceramic birdbaths on the ground to prevent animals from tipping and breaking them.

If someone sees an animal in distress and wants to help, Doty recommends they call a wildlife rehabilitator for advice. A list of licensed rehabilitators is available at illinoiswildlife.org.

ABOUT EXTENSION: Illinois Extension leads public outreach for the University of Illinois by translating research into action plans that allow Illinois families, businesses, and communities to solve problems, make informed decisions, and adapt to changes and opportunities.