Protect your plants from Japanese beetles 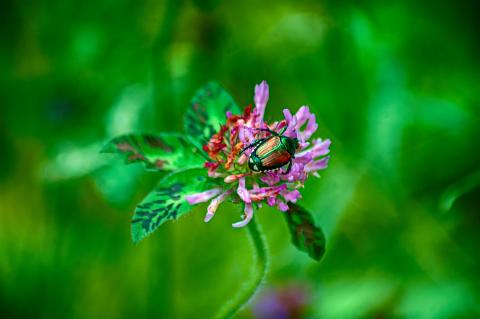 URBANA, Ill. - With their copper-colored wings and shiny metallic green heads, Japanese beetles aren't hard to find. Extension Master Gardeners have already reported sightings of these destructive beetles on plants, but help to control these garden nemesis is available.

The adult beetle is about one-half inch long, says Ken Johnson, University of Illinois Extension horticulture educator. Along with the copper-colored wing covers and metallic heads, the beetles have prominent white tufts of hair along their sides. Adults feed on over 300 different species of plants and the larva, c-shaped white grubs, feed on turf roots.

Some of their favorite plants include linden, rose, crabapple, willow, grape, and raspberry, Johnson says. Adults will begin feeding on the upper, sunlit portions of plants and work their way down. Their feeding damage can cause leaves to look lice lace. When feeding is heavy, entire branches can be stripped of leaves.

"One of the reasons they are so destructive is that they are attracted to plants that have already been damaged," Johnson says. "Since large numbers of beetles can be attracted to susceptible plants, it is recommended to take action as soon as the first beetles are seen.

Adults can be removed by hand. The best time to do this is in the early morning while they are still sluggish. Put a few inches of water in a container along with a drop or two of soap to break the surface tension of the water and allow the beetles to drop into the water.

High-value plants, such as roses, can be covered with cheesecloth or other fine netting during peak beetle activity to protect them. "Just make sure that the openings are small enough to keep the beetles out," Johnson says.

Japanese beetle traps are not recommended for managing populations of beetles. "The traps attract far more beetles than they can trap and may end up doing more damage than good," Johnson says.

Chemicals can also be used to help manage beetle populations. Check with your local Extension office for the most up to date recommendations. Some chemicals will require multiple applications. "When choosing a product, make sure that the site/plant that you plan on applying it to is listed on the label," Johnson says.  "Always make sure to read and follow all label directions."

Controlling Japanese beetle grubs in your lawn won't have a significant impact on adult populations. The adults are capable of flying long distances and will fly in from adjacent properties. If you don't want to fight the beetles you can try growing plants that are unattractive to them, such as columbine, begonia, dogwood, forsythia, holly, impatiens, lilacs, hosta, and violets.

ABOUT EXTENSION: Illinois Extension leads public outreach for the University of Illinois by translating research into action plans that allow Illinois families, businesses, and communities to solve problems, make informed decisions, and adapt to changes and opportunities.