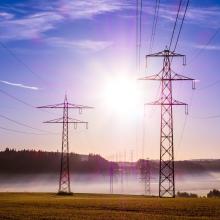 URBANA, Ill. - The National Weather Service reports that portions of the Midwest have experienced record-breaking, early-season heat, including numerous record highs and heat index values above 105 degrees. The Weather Channel’s summer outlook predicts hotter than average conditions across the Rockies, Plains, and the Midwest throughout July and August.

“The summer outlook serves as a stark reminder of our reliance on the power grid and the importance of decreasing energy use on hot days to reduce stress on the power grid and avoid rolling blackouts and uncontrolled power grid outages,” says Susan Odum, University of Illinois Extension community and economic development specialist.

Scientific American has created videos to help consumers better understand today’s power grid. A video on Energy.gov demonstrates how “just-in-time” smart grid technologies enable power companies to match supply with demand, ensuring that every kilowatt is used at the instant it is created. When demand outstrips supply, as one might expect during record-setting heat, the grid can be crippled, resulting in rolling outages, or in the worst-case scenario, everything can go dark.

A second video by Scientific American summarizes the history of the power grid, the North American power grid structure, and the interconnectivity of the overall system. In an ever-increasingly connected system, demand estimates are crucial, as grid operators must assess their need for reserve power before a crisis, enabling them to draw power from other grids or secondary power generation sources to prevent widespread power failure.

Midcontinent Independent System Operator manages and operates the electric grid in 15 midwestern states, including most of Illinois. If the Midwest region experiences an above-normal heat wave during the peak summer period, or there are unforeseen generator and transmission outages that occur, MISO, and its affiliate energy providers, could call on consumers to conserve energy and implement other emergency operations to protect the power grid. In the worst-case scenario, MISO could call for temporary, controlled outages to prevent an uncontrolled, cascading power grid outage.

Recently, Southeastern Illinois Electric Cooperative, Inc., a MISO affiliated energy provider, issued a release stating, “Your Cooperative wanted to make you aware that there is a possibility that rolling blackouts could occur this summer. A recent generation capacity auction has revealed that the Midwest could fall short of needed generation capacity to serve the summer peak load under certain conditions. In the event this happens, your Cooperative would be directed to disconnect a portion of the load in order to prevent grid failure.”

Consumers served by Ameren or ComEd may lower their energy costs by agreeing to reduce usage during peak periods such as hot summer afternoons or cold winter mornings. For more information about these energy-saving programs, check out Ameren’s Power Smart Pricing or ComEd’s Hourly Pricing Program.

Reducing your energy use during peak periods and implementing energy-efficient strategies can save energy and money. Check out the Energy Saver resources available at Energy.gov for ways to reduce your energy usage and costs. For more energy-saving tips, check out the no-cost and low-cost resources provided by Citizens Utility Board, Ameren, ComEd, Southeastern Illinois Electric Cooperative and the Touchstone Energy Cooperatives.