URBANA, Ill. – After a cold, wet spring Illinois farmers are racing to get their crops in the field. As large farm equipment moves along country roads, both farmers and those driving a vehicle should adopt a "safety first" attitude. 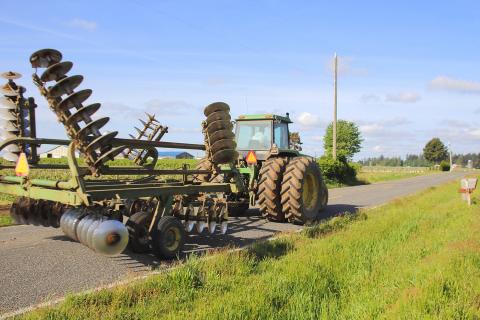 "Since many drivers are unfamiliar with the size and maneuverability of farm equipment, operators should use hazards and turn signals diligently. Avoid moving equipment during peak traffic times. For example, shuffle equipment in the middle day to avoid people driving to and from work and school. When yielding to oncoming traffic, slow down and be aware of soft shoulders. Avoid distractions, such as using cell phones when driving, and refrain from carrying passengers," says Josie Rudolphi, University of Illinois Extension, Agricultural & Biological Engineering Assistant Professor.

Transportation incidents, including tractor overturns, are the leading work-related cause of death for farmworkers, according to the Center for Disease Control and Prevention.

Farmers will pull off the road to allow motorists to pass when it is safe for them to do so, but they cannot move aside immediately since it can be a hazardous maneuver. Unpaved road shoulders can be soft, wet, rutted, or steep, which can cause farm vehicles to tip over.

Drivers should watch for the Slow-Moving Vehicle, SMV, sign – a bright orange triangle trimmed with red reflective tape. The SMV emblem is a warning to motorists that the vehicle they are approaching is only capable of moving up to 25 mph, and poses a hazard. The emblem is required by law on all tractors, combines, and other farm equipment.

Drivers should not assume that the person operating the farm equipment knows a vehicle is nearby – they cannot see drivers that are following closely or if they are travelling close to the side of the equipment. Modern farm equipment is often wider than a traffic lane, particularly on bridges and raised roadways. Approaching traffic needs to be prepared to allow wide equipment to pass.

30 Second PSA – This spring planting season, use a “safety first” approach when driving around slow-moving farm equipment on rural roads. Slow down when approaching farming equipment, especially those with a bright orange slow-moving vehicle sign. Give yourself plenty of space and be prepared to stop. Assume the driver of the farm equipment does not see you. Before attempting to pass, make sure the farmer is not preparing to turn. Approaching traffic needs to be prepared to allow wide equipment, often wider than a single lane of traffic, to pass.