How to prune fruit trees for healthier trees and better harvests 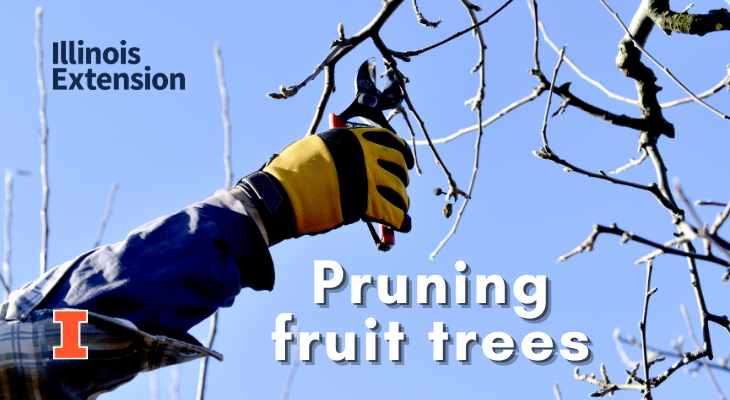 It’s that time of year - time to start thinking about pruning your deciduous trees. Most deciduous trees are best pruned while they are in full dormancy. This happens to be January to early March for this part of the country.

While many of our landscape trees don’t necessarily need yearly pruning, the same can’t be said for fruit trees, especially if you want healthy trees that bear fruit consistently. If fruit trees are left to their own devices, they can quickly get too tall to harvest fruit at trees' tops easily.

Fruit trees are pruned for several reasons. First, to open the canopy so that all branches receive sunlight. The more sunlight a branch gets, the better its fruit production will be. Second, to help manage diseases and make pesticide applications easier. Opening the canopy to sunlight and air allows the canopy to dry out faster, helping to reduce disease problems. Finally, keeping trees short so that fruit can be reached.

The way you train and prune your fruit trees will depend on the type of tree it is. For semi-dwarf apple and pear, a central leader system is often used. For peach and nectarine trees, an open center system is recommended. These aren’t the only ways you can train fruit trees, though; there are various other ways to train trees.

When pruning, the first step is to clean up the tree by removing any dead, damaged, crossing, and diseased branches. If you are removing diseased branches, make sure you are pruning back into healthy wood. For example, with fire blight infected trees, make sure you are pruning at least 8-10 inches below any discolored bark. Any suckers that have grown should also be removed. 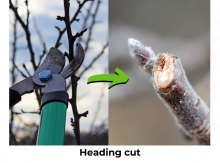 When it comes to managing tree size and shape, there are two types of pruning cuts you’ll perform: heading and thinning.

Heading cuts are used to shorten and stiffen branches as well as to cause branching. This is done by removing the end of a branch. By doing this, the terminal bud is removed. These terminal buds prevent shoot development from buds below them. Therefore, by removing these buds, new shoots will begin developing just below the cut’s location.

Heading cuts result in a thicker, denser canopy, which can reduce light levels within the tree. Heading cuts should be used primarily for establishing branches in young trees and after that used sparingly. In older trees, they can be used to shorten and stiffen branches. 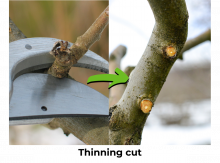 Thinning cuts remove an entire shoot back to its point of origin. Unlike heading cuts, thinning cuts do not induce excessive vigorous regrowth. Thinning cuts open the tree’s canopy, allowing more sunlight to reach the interior of the tree.

While pruning trees, make sure to sanitize pruners to prevent the spread of disease. You can use a 10% bleach solution, isopropyl alcohol, or sanitizing wipes. Also, make sure you are using sharp tools. Sharp tools make cleaner cuts, which will heal faster than if using dull tools. When you are done pruning, make sure to clean up and remove pruned wood, especially if it is diseased, and properly dispose of it. 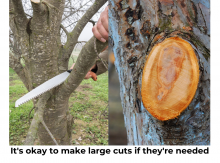 Most people, especially when they first start, are intimidated by pruning fruit trees and end up pruning too little. So, don’t be afraid to make large cuts if you feel they are needed. If you’re worried, remember what you are trying to achieve when pruning, a tree with a balance between growth and production, that is easy to manage and open to light and air.

Good Growing Tip of the Week: If you have a large tree that has been neglected for several years, it is best to rejuvenate/renovate the tree over a period of three years, making sure to remove no more than one-third of the tree per year. This will help prevent excessive sucker formation as well as sunburn to previously shaded areas of the tree.