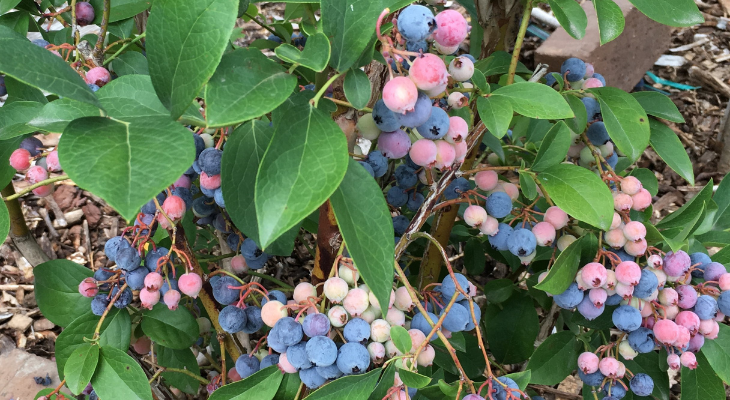 The 2021 Garden Trends Report by Garden Media Group says, “Victory garden was spurred by the increase in home cooking in 2020. GMG says 31 percent of people would like to grow fruits in their backyard and berries are at the top of the list.”

Strawberries and blueberries can both be grown in containers or raised beds. All berries need consistent watering, especially in containers and raised bed, or the harvest will be compromised. The pot does not have to be deep as strawberries are shallow rooted. For best results, fertilize all container strawberries every three to four weeks.

Day-neutral strawberries bloom and produce smaller amounts of berries and can be planted three inches apart, covering the top and spill over the sides of the container. It should be filled with two parts peat and one part perlite. If you know someone with a strawberry patch, they will be renovating (removing daughter plants) and have plenty of off-shoots to offer a fellow gardener. These daughter plants can be planted in containers and treated as an annual. Tristar and Tribute cultivars have good disease resistance with medium sized berries.

June-bearing strawberries are the most common, producing large plump berries for two to three weeks in late spring. Before planting bare root bundles in a raised bed, amend the soil with organic matter. Plant in March or April, and do not cover the crown. The common way to plant these is in a matted-row configuration, with 24 inches between plants at time of planting. Then four weeks later, runners (daughter plants) will need to be pressed down, creating a box with four corners around the mother plant. The remaining runners should be removed in addition to all of the flowers for the first year. This will produce a larger crop in year two. Fertilize in early spring. ‘Earligro,’ ‘Delmarvel,’ and ‘Allstar’ are June-bearing cultivars with good disease resistance and medium to large sized berries.

Blueberries require acidic soil or they will not get the nutrients they need to produce fruit. Use a mix of one part sphagnum peat moss and one part shredded pine bark to provide acidic soil. Blueberry plants are also shallow rooted. The roots do not mine the soil very well, so a 10-15 gallon container would be sufficient.

'Northland' or 'Patriot' are recommended for Illinois for their cold hardiness, but grow four to six feet. ‘Top Hat’ is less cold hardy, but is ideal for containers, growing between two and three feet. ‘Bushel and Berry’ is a series of cultivars described as patio perfect. These grow shorter but have cold hardiness issues. ‘Blueberry Buckle’ and ‘Perpetua Blueberry’ are the hardiest cultivars in the series.

No matter what variety, plan to move containers to the garage for the winter season because despite being cold-hardy, their roots are more likely to be exposed to freezing.