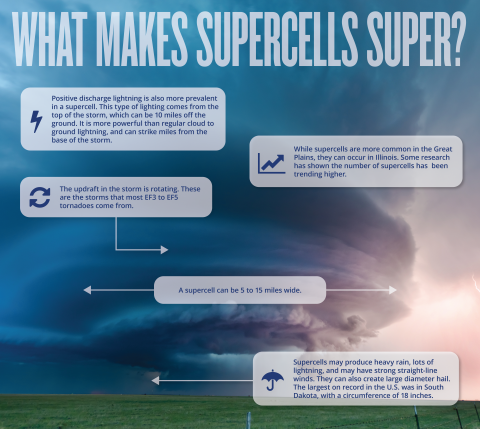 A supercell can be 5 to 15 miles wide. The updraft in the storm is rotating.  These are the storms that most of the nasty EF3 to EF5 tornadoes form from. They may produce heavy rain, lots of lightning, and may have strong straight line winds.

Supercells and the Dry Line

Supercells often form along a boundary between two different types of air called a dry line. This is not talked about very often in Illinois, but is mentioned more in states like Oklahoma, Texas and Kansas, where the dry line is more common.

What is a dry line?  It’s a boundary between hot, dry air from of southwestern U.S., and warm muggy air from the Gulf of Mexico. Because this air originates from the higher elevation of the southwest U.S., and because it is hot, it stays at that higher elevation as the air migrates towards the Great Plains. As this air moves east, the warm muggy Gulf air becomes trapped underneath the hot dry air, and not allowed to rise. As long as the Gulf air is trapped, there aren’t any storms, hence the name dry line.

Is some instances though, the Gulf air can push through the overriding hot air. When it does, Mother Nature opens up a can of fury.  Air can be rising at speeds over 150 miles per hour. Air that was moving horizontally may already be rotating due to air moving at different speeds at different height, and if this air is pulled into the updraft, the updraft starts rotating. If the rotation tightens up, a funnel may reach the ground and become a tornado.

Other Aspects of Super Cells

Supercells can also create large diameter hail. The largest hailstone recorded from a supercell in the United States was in South Dakota, with a circumference of 18 inches. I doubt even a football helmet would help with a hailstone that size.

Not all supercells produce heavy rainfall, but there is a subcategory called High Precipitation supercells that do. These may cause flash flooding, and are dangerous because potential tornadoes may be rain wrapped and hard to see.

While supercells are more common in the Great Plains, supercells can and do occur in Illinois. Some research has shown the number of supercells in Illinois and the Midwest has recently been trending higher.

Whenever there is a severe weather watch or warning, you may hear weathercasters mention supercell development. As always, be prepared to go to a safe location if one is coming your way.