What is that lazy, crazy haze? 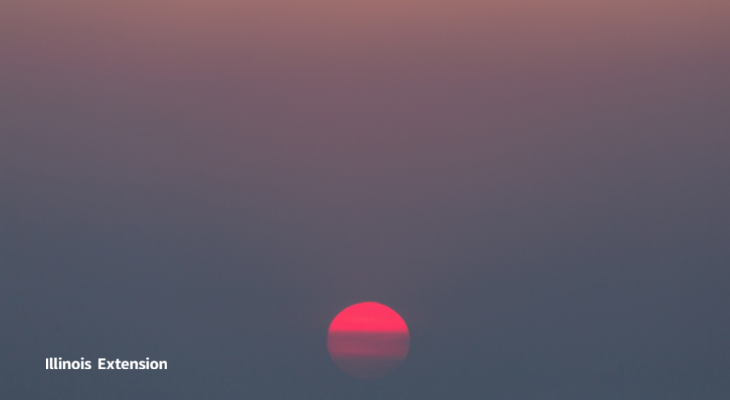 Growing up, we would listen to the local radio station at breakfast. In addition to the news, they would play songs from the great crooners of the time, including Nat King Cole. One of his songs is The Lazy, Hazy Crazy Days of Summer.

As I look out my window, the sky has a milky, hazy appearance. What is haze and why does it happen?

Haze is made up of very tiny particles that can be solid, liquid, or a combination. The particles are so small they can stay suspended in the lower areas of the atmosphere near the earth’s surface. If you fly commercially during the summer, you can see that the haze does not extend up very far.

In Illinois, we experience haze when it’s humid out, or in other words, when there is a lot of water vapor in the air. In turn, we think of haze being caused by all that water vapor. However, have you noticed we can have days that are still humid but not hazy? Of course, you have. The water vapor can affect haziness, but we can have haze on non-humid days.

Particles that cause haze can be natural or human-produced. If you have been to the Smoky Mountains, there are natural compounds called terpenes that are given off by the evergreen trees present. Unfortunately, a lot of the haze that is seen in the central and eastern part of the United States is more human-produced.

Much of the haze produced in the eastern half of the U.S. is related to smoke from coal combustion and the release of sulfuric compounds in the air. During the summer, the Midwest and eastern part of the United States can have extended periods where air masses are not moving very much, allowing particulates to build up. Many of these particulates, including sulfur compounds, attract water. High humidity provides many water molecules to attach to these particles, creating an even denser haze. The good news is, this type of haze has become much less common than it was several decades ago, due to air quality regulations.

The haze we’ve experienced the past few days is not coming from power plant pollution or from evergreen trees, but, rather, from all the forest fires in the west. The tremendous amount of smoke from these fires is traveling up into Canada and then funneling down across Illinois and onto the east. Smoke particles from forest fires are also water attracting, so these can also have water molecules attach and decrease visibility.

By the time this gets posted, hopefully, there will be some “fresh air” that has moved into Illinois. If it hasn’t, watch the weather reports on air quality, especially if you have health issues. My other suggestion is to listen to that Lazy Hazy Crazy Days of Summer song, and remember that summer will be leaving us soon!