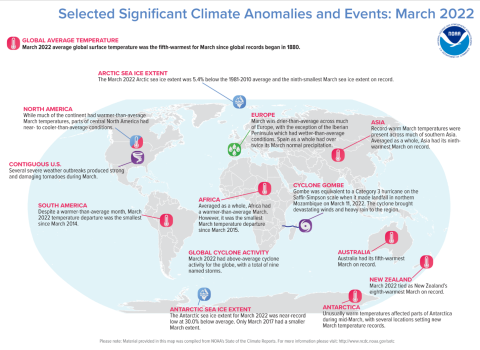 I don’t know about you, but this April was not what I was expecting or hoping for. Many days were 5 to 20 degrees below average, and below freezing temperatures occurred even during the last week of the month. How can we have such a cold spring when we are increasing global temperatures? There are several things to look at to explain why this can occur.

Two things to notice on this map. One is that March averaged cooler than normal in central North America, while globally it was the fifth warmest month on record. If one looks at most months, recent global temperatures continue to be within the top ten warmest. New record monthly highs are not uncommon. The takeaway from this is that, on a small scale, cooler monthly temperatures each year can prevail, but the long term and global trend is still for warming.

Why cooler temperatures in the Midwest this April? 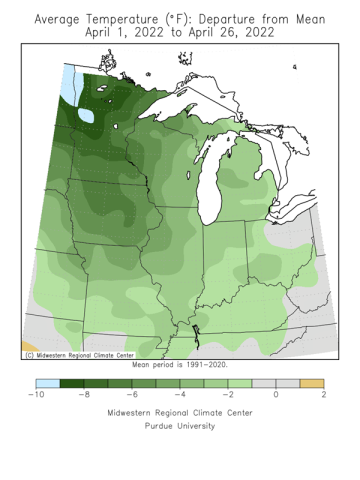 The map shows that temperatures averaged 2 to 5 degrees below normal for most of April. According to The Weather Channel, part of the reason for the colder temperatures in the Midwest is the North Atlantic Oscillation (NAO) being in its negative phase to start the month.

The North Atlantic Oscillation is associated with differences in air pressure from near Iceland to near Bermuda and the Azores in the Atlantic Ocean. The changes in pressure can swing from a large difference in air pressure (a positive phase) to a smaller difference (a negative phase), and may occur over several months at irregular time intervals.

A negative phase means there is blocking high pressure in the northern Atlantic, which can force cooler air southward from Canada into areas east of the Rockies. When you look at the graph, you see we have been in a negative phase for much of April.

Though our growing season and dates for the last spring frost/freeze has tended to happen earlier in the year, that doesn’t mean a late frost cannot happen. According to the Prairie Research Institute/ Illinois State Water Survey at University of Illinois, the median date for frost/freeze ranges from April 8 in southern Illinois to May 5 in northern Illinois. Looking at the latest dates for a frost, those range from April 26 in southern Illinois to May 27 in northern Illinois. So, some areas could still experience a frost or freeze in parts of Illinois in May in any given year. It may not happen very often, and the chances may be decreasing, but it can still happen. This can have major implications as we trend towards greening up earlier, which means vegetation may be farther along if a late frost occurs.

MEET THE AUTHOR: Duane Friend is the Illinois Master Naturalist Coordinator and Climate Specialist with University of Illinois Extension, serving the organization in many roles since 1993. Duane provides information and educational programs to adult and youth audiences in the areas of soil quality, weather and climate, energy conservation, and disaster preparedness. These programs provide practical solutions for families, farms, and communities.  He assists families in creating a household emergency plan, farmers with the implementation of soil management and conservation practices, and local government officials and business owners with energy conservation techniques.